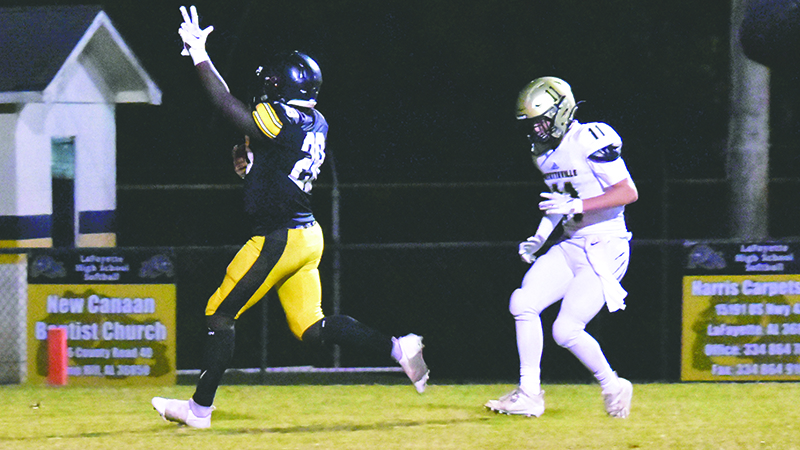 The LaFayette Bulldogs leaned heavily on their defense to grind out a 19-5 victory over the Fayetteville Wolves Friday night at Bulldog stadium.

On LaFayette’s first offensive drive, the Bulldogs stalled inside the ten-yard-line. Penalties hindered the offense, backing them up to the Fayetteville 18-yard-line. After a quick timeout, Coach Juan Williams decided on a 35-yard field goal attempt that fell short.

“We gotta get better on offense. Right now, penalties and everything are killing us,” Williams said. “We don’t understand certain things about the game right now, and we’re trying to get new guys in here, trying to learn the value of football.”

With 7:50 left in the half, Fayetteville would go for it on 4th and 5, but the Bulldog defense would hold, stopping the opposing quarterback for a loss to give their offense the ball back on the Bulldog 30.

Striking quickly, Ja’mariae Daniel rushed to the right for 30 yards down to the Fayetteville 40 yard line. Bulldog quarterback Ty’quavian Daniel would then connect with Joshua Combs on a 20-yard pass to set LaFayette up just outside the Wolves 20 line. Ja’mariae Daniel would plunge up the middle for a touchdown to cap off a methodical 6-minute drive in the second quarter.

The Wolves pulled a play from the 2019 Baltimore Ravens playbook and attempt a fake kneel down with 10 seconds left before halftime, but the Bulldog defense was ready and stopped the play for no gain. Vinay Singh put a bow on the defense’s first-half dominance with a sack and the Bulldogs went into halftime with a 7-0 lead.

The Bulldogs fielded the second half kick deep in their own territory and started their drive at the 7-yard line. Ja’mariae Daniel rushed to the left for a 6 yard gain only to have the run called back on a holding penalty. After some discussion, the referees determined that the hold took place in the end zone resulting in a safety bringing the third-quarter score to 7-2.

The Bulldogs scored again with 4:49 left in the third quarter on a 10-yard rushing touchdown by Ja’mariae Daniel that was set up by a spectacular 20-yard reception by Damarcus Holloway. The extra point was blocked, increasing the Bulldog lead to 13-2.

The offensive struggles would continue for the Bulldogs with a quick three and out forcing a punt deep into Wolves territory. On the ensuing possession, the Bulldog defense blitzed and forced Wolves quarterback Pacey Deloach into an errant throw that was initially ruled a backward pass. LaFayette returned the fumble for a touchdown, but, that too was called back after officials huddled to discuss.

On the very next play from scrimmage, Deloach dropped back and hit Cadence Barrett on a 60-yard throw to the Bulldogs 38. The Bulldog defense held the Wolves to a field goal that bounced off the crossbar, cutting the Bulldog lead to eight.

“My guys are resilient. We bend but don’t break,” Lewis said of the defensive effort.

With 8:53 left in the game, the Bulldogs went another clock-killing drive that was capped off by another rushing touchdown by Ja’mariae Daniel.

Holloway closed out the game for the Bulldogs with an interception inside their 5-yard-line with less than two minutes to go in the ballgame.

The Bulldogs will host Vincent next Friday at Bulldog stadium.