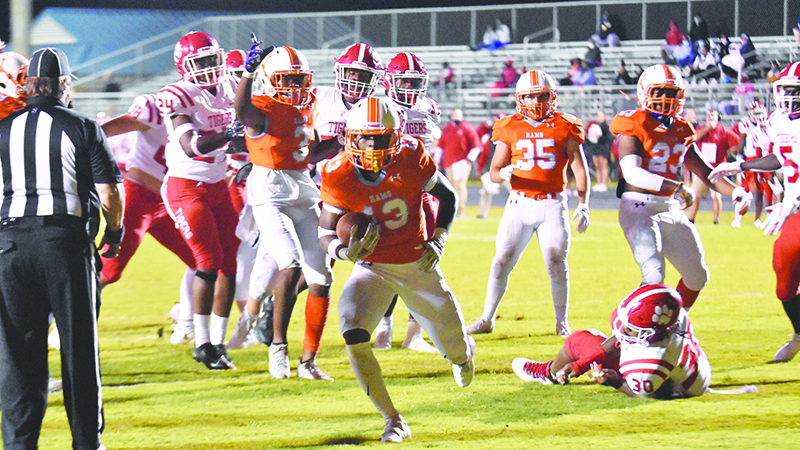 It looked like the Valley Rams would be able to match the firepower of the Eufaula Tigers, but as the temperature dropped, so did the Valley offense in it’s 44-14 loss.

“They came out and hit us in the mouth and we didn’t respond very well,” head coach Adam Hunter said. “We got down big time, and we didn’t play our best tonight, and that shows. We didn’t have a great week of practice, so preparation has to be better for us to finish this thing out.”

The Tigers jumped ahead on the first possession of the game, scoring on a post route that went 55 yards over the middle of the field for their first score. The drive took less than two minutes.

The Rams answered with a six-minute drive that was capped off with a three-yard run by Josh Heath.

From that point on, everything fell apart for the Rams as the Tigers continued to take advantage of the Rams’ defensive miscues.

“They’re a good team,” Hunter said. “[Rodarius Thomas] is good. They have a good quarterback and they threw it on us pretty well. That’s just the nature of the beast, so we have to get better.”

The Tigers followed the Rams touchdown with a quick drive that was scored with a power run up the middle by the Tigers’ running back from a yard out.

The Tigers forced the Rams to punt on the ensuing drive. The Tigers had a man come off the right side of the Rams formation and get to Jayden Angel before he had a chance to get the ball off. The punt soared back into the Rams’ end zone, where they were able to recover it for a safety.

The second quarter was all Eufaula as it followed up it’s 16-point first quarter with 19 points in the second.

The only time the Rams defense got a stop was when senior safety Josh Bailey intercepted a pass in the end zone.

After allowing a 30-yard touchdown on the Tigers’ first possession of the half, the Rams’ defense started playing the way it had all year.

“The defense came back and held them for the most part. They bounced back,” Hunter said. “The kids didn’t give up. They kept fighting, so that’s key. That’s something that we can grow on and use.”

It started with Jaiden Phillips, who intercepted Tiger quarterback Copeland Cotton at the 25-yard line. He got a couple of blocks, then was off to the races, scoring the Rams second touchdown.

On the next drive, Quez Trammell out jumped a Tiger for another interception.

The Rams also had several key injuries in the game, as Heath and junior receiver Kalen Sharell both exited the game early in the second quarter.

Friday was the first time Heath did not finish with more than 100 yards on the ground.