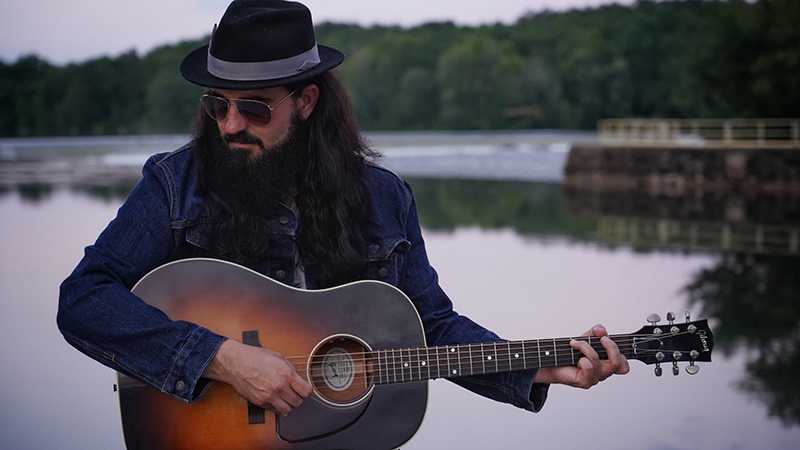 When MTV launched in August of 1981, Brooks realized his dream was to become a singer and a songwriter. A little less than 40 years later, Brooks’ is on the way to make his dream his reality. The first step to achieving that dream came when his first album was released on Sept. 11.

“It was a lot of hard work,” Brooks said. “It was a dream for a long time that I never really thought was going to happen. It’s a pretty surreal feeling when it all played out in the end and came out. It’s been pretty cool.”

Brooks attended Valley High School but didn’t play in the band and was only in the school’s chorus class for a year.

He started his musical career when he turned 18 when he was the frontman for the band Fifth Element. After a couple of years of practice, the band was ready to perform shows. They were together for 12 years playing cover music. They opened for bands like Blackberry Smoke and Drivin’ and Cryin’.

“We did some things with that, but it was always playing other people’s music,” Brooks said. “It was fulfilling at the time. It was fun. I was playing music and getting to entertain. It was a fun experience, but it really just wasn’t fulfilling.”

After 12 years of playing, Brooks left Fifth Element and stopped playing music altogether, so he could focus on his family and his business.

“I put all the guitars in their case and just put them in the closet and just forgot about them for a while,” Brooks said. “At the time, I was married and had three kids. I’d work five or six days a week then I’d play every Friday or Saturday night. I was just never at home, and I was missing them grow up.”

Brooks’ hiatus from music lasted a little more than five years. While in that time period, his life was flipped upside down. In a three-week span, he lost his business, was divorced and his dog died.

While he was going through all of those problems, Brooks turned back to music to get him through his tough time.

“In that depressive state, I found independent singer/songwriter music,” Brooks said. “That just opened the door to endless artists and a world of music that I’d been blind to. I still listen to several different types of music because I’m a fan of music, but if it wasn’t on the radio, I didn’t know it existed. Through apps like Spotify, I started diving deeper and deeper into those artists, and it lit a fire for me to start playing again.”

His two biggest influences at this time were Chris Stapleton and Jason Isbell.

After getting back into music and playing for about two years, Brooks was invited to play at a festival in West Virginia in August of 2018.

To this point, Brooks was still covering songs. He would make them as much as his own as possible, but the songs still weren’t his. Because of that, Brooks had some trepidation about going to the festival and performing.

“I had nothing else going on at the time, but I had never played a festival,” Brooks said. “They may play a few cover songs, but generally, you’re up there showcasing what you’ve written.”

Even without his own songs, he went and performed. Brooks said it went well, but when he walked off stage, he had a feeling he never wanted to feel again as an artist.

“I just felt like I wasn’t an artist. I felt like I was just a mimicker,” Brooks said. “A lot of the songs I did, I would take them and make them my own, but it’s still not mine. Me as an artist and an entertainer, I wasn’t fulfilled doing somebody else’s stuff. The feeling of walking off the stage, knowing that I just played for 45 minutes and put it all on the line for someone else’s work. I’d rather be doing it for something I’ve created.”

The festival was on Aug. 24 and by Sept. 2, Brooks wrote his first song.

In that seven-day span, Brooks had to figure out where to start, since he had never written a song before. He reached out to his friend Billy Sayle, who was a songwriter in Mississippi. He told Sayle that he had been performing his whole life, but now wanted to start performing his own songs and wanted some advice on how to start the songwriting process.

“I had stories inside that I needed to tell, and I wanted to tell,” Brooks said. “I just didn’t know how to do it. I was scared to put my feelings down on paper and then have them judged by other people. That feeling of emptiness walking off that stage [in West Virginia] was enough to push me to do it and see what happened.”

Sale responded by sending him a song that he had been working on and let Brooks take it over. Brooks wrote a melody for the song, which became “Memories” (the first song on the album).

From the beginning of September of 2018, Brooks started to write his own songs. Some took less than 20 minutes, while others took up to eight months.

Brooks finished writing the songs for the album and was ready to record by the end of 2019.

To record the album, Brooks needed to be in West Virginia to start 2020, so he jumped in headfirst.

He quit his job, with Jan. 6 being his final day on the job. On Jan. 8, Brooks was in West Virginia starting to record his songs.

“I worked for the state of Alabama. I had retirement. I had sick time, vacation time [and] had great insurance,” Brooks said. “I gave all of that up to make this. It was going to take a while and I was doing it in West Virginia, so there wasn’t a way for me to [keep the job] without going up every weekend. It would have taken a year and a half to make the album if I didn’t just consecutively work on it until it was done. I just knew that if I didn’t give it one more shot, and I didn’t go out and at least attempt to make it as a professional musician, at whatever age I was lying on my deathbed, I wasn’t going to be satisfied.”

The album was finished by the start of July. For the next two months, Brooks spent his time working to get the album packaged and onto Apple Music, Spotify, Pandora and YouTube.

The album was released at midnight on that Friday, so Brooks had a release party on Friday night. When the album actually dropped at midnight, Brooks was in his hotel room in Lexington, Kentucky with his girlfriend.

“Forty years is a long time to think about something, to dream about something and actually have it come to fruition,” Brooks said. “I just remember feeling really calm. I was excited, but I was almost numb.”

The feeling of his album coming out really hit him the next morning.

Brooks woke up about 9 a.m. and looked at his phone for the first time.

“There’s just hundreds of notifications already. I opened my phone and started reading some of the stuff, and that was the moment where all of the emotions really hit,” Brooks said. “I’m sitting in the hotel room, balling my eyes out. The emotions overtook me and I probably cried for about 10 or 15 minutes. All the hard work and the dream, the whole puzzle coming together at the end was pretty cool.”

Links to Brooks’ music and information about upcoming events and social media can be found on his website https://mardebrooks.com/.