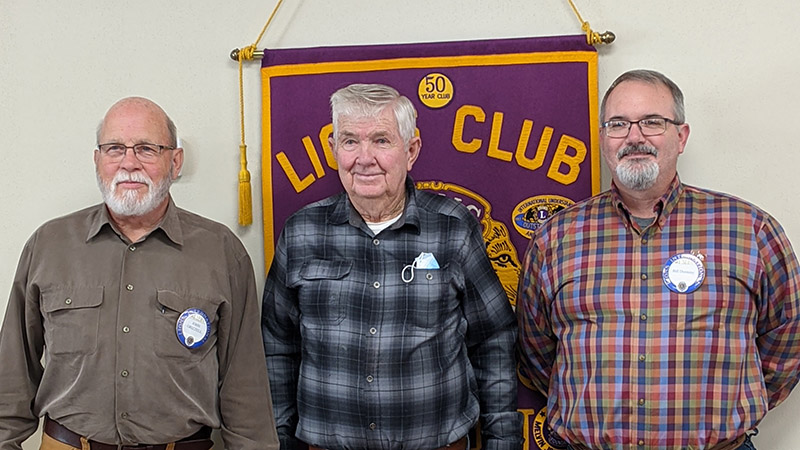 The West Point Lions Club had a lesson in woodworking on Wednesday from guest speaker Billy Browning.

Browning worked in construction for more than 60 years. On his resume, he has 400 houses, 15 textile plants, five churches, four schools, two banks and so much renovation work that even Browning couldn’t remember it all.

“Billy is one of those people that walks out into the world and sees things that a lot of us would walk away from and say ‘that’s just nothing,’” West Point Lions Club member John Grizzell said. “He sees an old rotted tree, and he sees what he can make out of that tree. He’ll pick up a piece of metal, and he’s making knives out of it. He has so much skill in so many fields. He makes rifle stocks. He was showing me a bunch of ax handles, hatchet handles and hammer handles. He just does those for the heck of it. Billy is what I would say a renaissance man.”

Browning retired from construction 10 years ago. In the decade since, he has kept himself busy by making dough bowls, knives and several different items out of wood.

“I started making a few dough bowls just working in the little shop at home, making dining room tables and furniture out of old antique wood,” Browning said. “I thought I’d be doing something a little easier than building a $16 million textile plant, so a lot less on my mind doing that.”

Browning uses any type of material he can find to create something. He has made dough bowls out of a rotted tree, which yielded five bowls and knives out of sawmill blades.

The first bowl Browning made was for his daughter for an Easter present in 2019.

Browning starts with a solid block of wood that weighs between 30 and 50 pounds. The one he brought for a demonstration was about 35 pounds.

“Someone asked ‘how do you do it?’ I said ‘well you just take a big piece of wood and take everything off it that doesn’t look like a bowl,” Browning said.

Browning uses a compound miter saw to cut the wood into the shape of the bowl, which he said takes about 500 strokes to cut the inside out of the bowl. He then uses a bandsaw to cut the back of the wood to shape it into the bowl completely. From there, he uses 16 grit sandpaper to sand down the rough spots, finer sandpaper to smooth the whole bowl out and then coats it with a finish to finish the completed bowl. The process takes four to five hours to finish.

Browning has made 56 bowls since April of 2019. The bowls can be found in California, Denver, Seattle, Washington D.C. and several in Alabama.

“In 1994, I was building some ceilings at Callaway Gardens. I was inspecting one of them and the ladder slipped. I fell and broke my back in two places,” Browning said. “The doctor said I’d never work again. I don’t think there’s been a day since then that I haven’t worked on something. Three years ago, they took my heart out and put pig valves in it (a Mechanical valve replacement). So just don’t give up.”

While making bowls is a project that Browning started two years ago, he has been making knives for more than 60 years. Since March, he has made 37 knives, 17 of which have been sold.

Like his bowls, Browning’s knives can be found in nine different states, making 12 total states that have a knife or bowl Browning has made.

A lot of the knife handles are made out of a bone or a tree knot.

“I made one for a grand boy out of a pine knot that I found in his daddy’s truck,” Browning said. “I made it as a joke, but I took it to the [Troup County] Sportsman’s Club, and they liked it so much that I had to build two of them. It’s been one of my biggest sellers since. You’ll never know what they’ll turn out to look like until you get the old rotten wood off.”

Browning sells his bowls and knives. He sells the bowls for $100, while his knives cost anywhere between $75 and $125.

“It just gives me something to do so I can stay out of trouble,” Browning said.