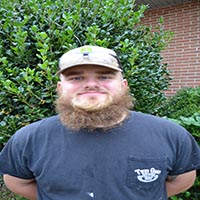 VALLEY — Justin Broyles is taking a different approach to have backyard chickens in Valley. Rather than going to the city council and asking for an ordinance to do this — something he’s attempted twice without success — he’s now trying to build community support for the idea.

On Saturday, Oct. 31, he and fellow backyard chickens advocate Levi Cole were at Valley’s annual fall festival giving out candy to children. Levi got into the spirit of Halloween by wearing a chicken outfit. To promote the idea of backyard chickens, they had an Asil and Brown Red chicken with them to show the children. They are looking at being at similar events through the Christmas season.

A big base of support Broyles has in his campaign for backyard chickens in Valley are the students and teachers in the FFA program at Chambers County Career Tech, now known as Inspire Academy.

“The kids I have talked to love the idea of having chickens in their backyards,” Broyles told The Valley Times-News. “There is so much you can learn about these birds. The 4-H program allows them to have a Chick Chain of six chickens. They can enter them in competitions and win ribbons.”

Broyles said Valley is among relatively few cities in east Alabama that does not permit backyard chickens. He said that Auburn, Opelika, LaFayette, Lanett and Roanoke allow it along with LaGrange on the Georgia side.

He has letters of support for the idea from Jack Robertson, president of the Chambers County Farmers Federation and Rachel Snoddy, Chambers County Extension Coordinator.

“I think that over the years there has been a disconnect between young people and agriculture and where our food comes from,” Robertson wrote. “Chambers County is truly fortunate and should be immensely proud to have a great agriculture program at the Career Technical Center in LaFayette.

Robertson went on to describe the Chick Chain and the other 4-H animal programs as good programs that can help overcome this disconnect.

“The Chambers County Farmers Federation would encourage the City of Valley to consider some kind of ‘exceptions or exemptions’ for these animal education activities that are part of the educational curriculum our community has developed,” Robertson wrote.

“Many communities in Alabama have updated their ordinances to allow for backyard flocks in recent years, including cities much larger than Valley,” Snoddy wrote. “Our extension staff would be able to offer continued support to area residents through backyard flock education and 4-H poultry projects.”

“It’s also a way for families to bond and work together while caring for their birds,” Snoddy noted.

Dr. Brigid McCrea, a poultry specialist with the Auburn University Extension System and the 4-H administrator for the state, is a big advocate of backyard chickens.

Broyles said there’s a lack of understanding of what’s at stake with backyard chickens. He said there won’t be large pens with hundreds of chicken, lots of noise and foul odors. A Valley resident would have a very limited amount of chickens kept in a small coop. As few as four hens would make for a good backyard flock and would provide the owner with more eggs than they might need but at a cost more favorable than buying them from a store.

He said there will be no roosters crowing at all hours of the night, and the cackling produced by the laying hens would be much less intrusive than the sound of dogs barking, something there’s always been lots of in Valley.

Broyles said that one lesson Americans should have learned in the COVID-19 shut down earlier this year is that there is a need for greater self-sufficiency.

“It’s a bad feeling when you go into Walmart, and there are no fresh eggs and other such necessities,” he said. “It’s just not wise to rely on people outside your household to provide all the necessities of life. There’s plenty of unnecessary anxiety when you don’t know where your next meal is coming from.”

Broyles said that during World War II, Americans were called on to have Victory Gardens and to raise chickens and other farm animals.

Broyles said that he developed a love for eating eggs when he was raising chickens in LaFayette and that he’d like to be able to do that in Valley.

“There must have been times when I’d eat three or four dozen eggs a week,” he joked.

According to Broyles, raising backyard chickens is already a big business in the U.S. and is only going to get bigger in the coming years.

“Right now, according to the USDA, an estimated one percent of all U.S. households have backyard chickens,” he said. “That’s projected to grow to as much as 17 million households, or five percent of all of them, in the next five years.”

Some of the well-known poultry producers, such as Tyson or Perdue, may have as many as 100,000 chickens in one large room. There’s plenty of chickens on small farms. As estimated 175,000 farms have less than 50 chickens.

Some people are reluctant to be around flocks of chickens due to contagious illnesses such as avian flu.

“This risk is almost non-existent when the flocks are small and diverse,” Broyles said. “The CDC says it is better to have the small, diverse flocks than the larger groupings of chickens.”

Broyles said that he was almost heartbroken when he learned he couldn’t have backyard chickens when he moved to Valley. Because of the way the city is zoned, there are some areas in the city where having chickens is permitted, but not where Broyles lives. He hopes to change this one day.

He said that there’s nothing personal about this.

“I have a good relationship with the mayor and council,” he said. “Valley is a tight-knit community, and that’s good. We just have to get across to the community that this is a good thing, not a bad thing. We have a Facebook group with 250 members. I am as transparent as possible with my Facebook profile. It’s available for anyone to see.”

Broyles got involved in raising backyard chickens when he worked at a Tractor Supply store.

“Some people consider them pets and give them names,” he said. “When you are around them a lot, you learn that they have different personalities, just like people. I had one hen who would lay two or three eggs a day when she was young and five or six a day when she was older. She lived to be eight years old before dying of natural causes. Some chickens have lived to the age of 15. The record is 20.”