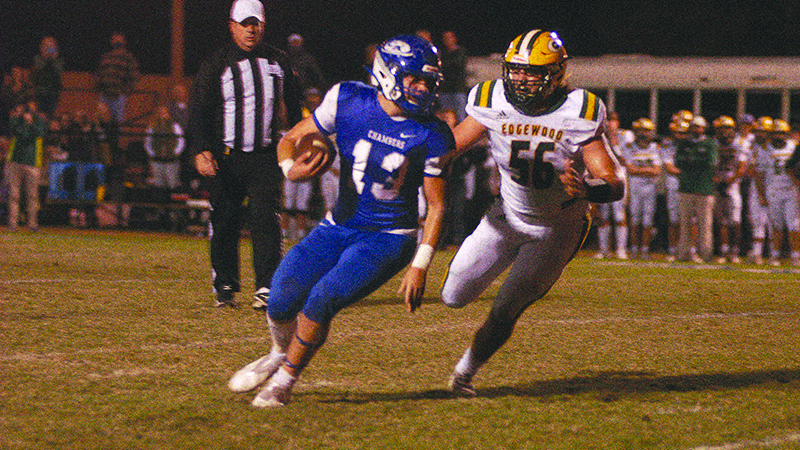 LaFAYETTE — The Chambers Academy Rebels avenged their only loss of the season and clinched their sixth straight state championship game appearance by walloping Edgewood 51-20 on Friday.

The game was never in doubt. The Rebels scored on their first offensive play and made the two-point conversion to make it 8-0, then added two more scores to make it 24-0 and kept piling up the points to make it 44-13 at the half.

“Our guys were dialed in tonight,” said head coach Jason Allen. “It was the kind of game where I didn’t have to make any rah-rah speeches. I knew they’d be motivated to play this game after having lost at their place, and they were. We came out with our hair on fire and took care of business.”

Allen said he was especially proud of this year’s senior class. They were 27-1 in their career at Torbert Field and 47-4 overall. They’d like to make it 48-4 next week at Montgomery’s Cramton Bowl in the state championship game versus Escambia.

“Our seniors never had to play a road game in the playoffs, and we won all the home games.”

The opening kickoff was something of a bad omen for the visitors. They mishandled it and were tackled on their nine-yard line. Two plays later, they fumbled it away with Kross Colley recovering for Chambers at the Edgewood 20. On the Rebels’ first play on offense, junior running back Jordan Benbrook took a handoff through a big home off the right side of the line and sprinted 20 yards for the game’s first score. Quarterback Payton Allen ran in the two-point play to give Chambers an 8-0 lead with 11:03 left in the quarter.

Edgewood then managed to drive the ball deep in Chambers territory before missing a field goal. The Rebels then went 80 yards, getting a touchdown on a 17-yard run by T.Y. Trammell and a two-point conversion on a pass from Payton Allen to John White. That made it 16-0 with 5:47 left in the opening period.

The visitors then dented the scoreboard on a long drive paced by a 62-yard pass play. A touchdown and successful PAT drew them closer at 16-7, but the Rebels struck back on their next possession, going 58 yards to extend the lead. Possibly the biggest play of the game took place on the first series of downs. Chambers went for it on fourth and one near midfield, and Allen got more than the needed yardage, carrying it to the Wildcat 47.

As it turned out, the Rebels extend their advantage a few plays later with Allen scoring from in close and adding the two-point conversion on another run to stretch the Chambers lead to 24-7.

It was all downhill from there for Edgewood.

On their next possession, Jarquez Banks and Colley combined to sack the quarterback on a third-down play, forcing an Edgewood punt. Chambers then drove it 78 yards to make it 30-7 midway of the second quarter. Jeremy “Spud” Conway caught a couple of key passes on the drive, and Trammell got the score on a four-yard run off the left side of the line. A try for two points came up short, but with 7:06 left before halftime, Chambers was up by 23 points.

Edgewood scored a touchdown on their next possession to draw to within 30-13, but Chambers scored two more touchdowns, one on a beautifully executed run by Trammell from 23 yards out and another on a 37-yard run by Allen with 17.8 seconds left in the half.

They got what proved to be their final points of the game on their first offensive play of the second half. Allen threw a short pass to Trammell in the right flat, and the fleet junior receiver ran right past one guy and then juked out another on his way to a 60-yard touchdown run along the home sideline. Jeremy Pollard’s point-after kick made it 51-13 with 11:44 left in the third quarter.

With the game well in hand, Chambers played reserves for most of the remaining second half. Edgewood managed to add one more score to make it 51-20, but Chambers back up players kept them from getting any more. The young guys had a most impressive drive to keep the ball away from the visitors in the game’s final minutes, driving the ball from the Rebel two to the Edgewood 40, running out the clock.

The offensive stars of the game were undoubtedly quarterback Allen and receiver Trammell. Allen ran for 183 yards and 3 TDs and had 219 yards passing and one TD. Trammell ran for 99 yards and three scores and had 115 yards receiving and one TD.

Jacob Oliver and Colley were the leading tacklers on defense, finishing with 10 apiece.