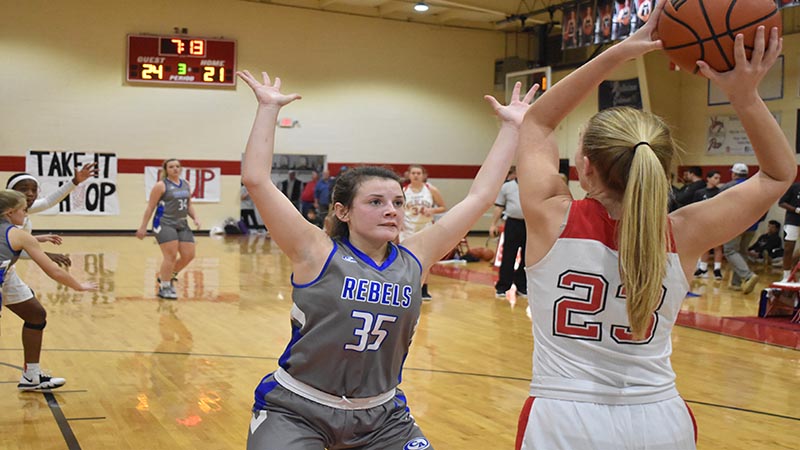 Last season, the Chambers Academy girls basketball team was close to bringing home their first state championship, but it faltered in the state championship, losing to Southern. Since that loss on Feb. 14, the Rebels have had their eyes set on making another playoff run in hopes of that first championship.

The journey started during the summer, as the team, along with every other girls’ program at Chambers Academy, was in the weight room three days a week in order to get physically ready for the season.

On Monday, the team will get a chance to show the fruits of its labor when they host Clark Prep in the first game of their season.

“Each team stands on its own. We can’t depend on what we did last year to give us success this year,” head coach Jeff Hines said. “Every team has a different dynamic, even though we return many of our players does not mean that we’re going to play the same way. We have to get in here and work every day. These girls have worked their rear ends off since the first Monday in June. I couldn’t be more pleased where we are right now.”

“We’re much more confident because we worked really hard during the summer,” Hines said. “We got stronger, we got quicker and our leaping improved. When you see the results of your hard work pay off, it doesn’t do anything but give you confidence.”

The Rebels bring back six of their eight members from the 2019-20 state runner-up team. Only Lizzie Keebler and Shelly Keebler graduated, so there will be a lot of familiar faces on the court for the Rebels this season.

“That is going to make a big difference in our team,” senior forward Brandalon Rombukas said. “We already have a lot that we already know. We just have to teach three, and that’s always a positive for the team.”

Even though they lost two seniors that were key leaders on the floor and the stat sheet, Hines will have three new players that will be able to add a lot of athleticism and depth to the team, as junior Bailey Allen, senior Megan Ware and junior Lindsay Fuller joined this year.

All three players were on the Rebels volleyball team that finished as a state runner-up in late October.

“It brings more athleticism to our team,” Hines said. “Bailey is a tremendous athlete, and that’s well documented. She’s a little rough around the edges, but that doesn’t concern me at all because of her athleticism. Megan on the other hand is a catcher in softball. Her feet are really good, her hands are really soft and playing in the post that’s going to be a good thing for us. She knows how to use her body to her advantage. It’s almost as if Linsay didn’t miss a beat being out last year. She can shoot it, she can handle it and she sees the floor extremely well. The sheer athleticism that they bring to the table, along with what we already have athletically, is a big plus.”

Claire Allen will take over the primary ball handler role from the two Keeblers this season. Fuller and Mattie Reese will also handle the ball during games. Natalie Lovelace and Lexi Smith will be on the wings. Senior Britten “BB” Stephens will be in the post alongside Rombukas, Ware and Bailey Allen.

The season starts on Monday at 5 p.m. CT against Clark Prep.