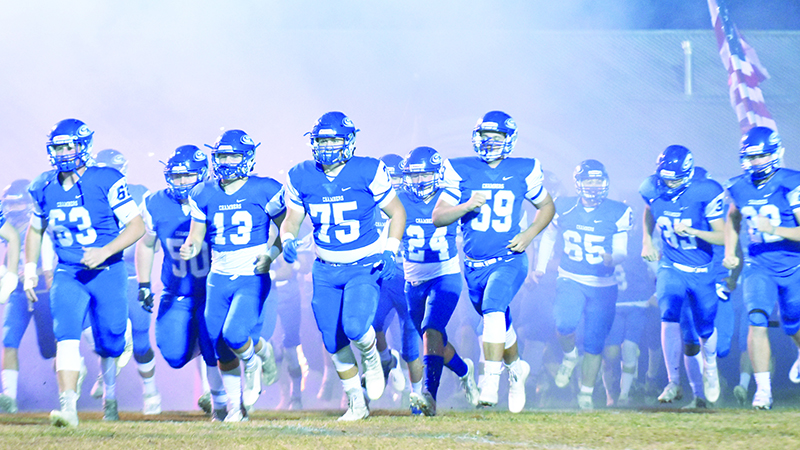 At this point, the Chambers Academy football team is used to playing in the final game of the AISA football season. On Friday, Chambers will arrive in Montgomery to play for their sixth state championship in the last six years.

“Some people take it for granted, making it to state every year, but it’s a challenge every year,” senior quarterback Payton Allen said. “We have a good team, and we have to have a good week of practice to get ready. We’re playing a good team on Friday, but I think that we have a good gameplan.”

Chambers has a lot of veterans that saw a lot of meaningful snaps in the last few state championship games, as roughly half of the starting offense and defense started in the championship game against Southern a year ago. But there are a lot of new faces that play significant roles for Chambers that are playing in their first championship game.

“It’s nice to keep the streak going,” senior offensive lineman Dean Sheffield said.” For these new kids that haven’t been to it, it’s a big deal for them, but it’s still a big deal for us. We need to treat it like any other game and play to the level we need to.”

While they have played in the last five state championships, the Rebels have come up short four times, losing the last three by a combined nine points.

“We just have to finish the deal,” head coach Jason Allen said. “We have to play better in championship games. We have to figure out a way to get over the hump in close games.”

There hasn’t been a simple answer for Jason Allen and his staff to get over that hump, as there has been a different challenge in every game.

In the loss to Southern, special teams changed the game, as a bad punt set up one of the two touchdowns scored by the Cougars and a punt returned for a touchdown scored the other touchdown of the game.

“It’s just the little things. It’s never just one thing,” Jason Allen said. “You’ve just got to be prepared in all three phases of the game, and you have to be smart as a coach.”

Most of the seniors on the 2020 team have played serious minutes in at least two of the last five state championship games. They have been passing along their experiences to the younger guys on the team that might have not played at this stage yet. The biggest lesson they’ve learned? You have to earn a championship.

“It’s not handed to us. Just because we’ve made it, doesn’t mean we’re going to win it,” senior receiver Josh Holliday said.

“You have to work hard for everything,” Sheffield said. “Even if you are reigning state champs or runner-up, next year is a new year. There are different levels of competition … You just have to keep on improving because if you don’t, you’ll get left in the dust.”

The Rebels will face off against Escambia Academy in the 2A state championship game.

Escambia has been one of the best teams in the AISA for the last five years, as they have reached the state championship game every year since 2016.

In the four championship games they have played, the Cougars are 1-3. Their opponent in all four was Autauga Academy, who Chambers defeated in the first round of the playoffs.

“They’re a solid team,” Jason said. “I think we’re two of the better teams in the AISA. I think Escambia will be the best team that we’ve seen this year … They’re hard-nosed. They run the football, and they get after you. It’s going to be a street fight. I told the kids whoever quits first is going to lose the game. Whoever’s willing to stand in the fox hole and fight the longest is going to come out winning. I have no doubt that our guys are going to fight until the final horn blows.”

There are two key offensive matchups to watch in Friday’s 2A Championship Game. The first is the quarterback battle.

Escambia is led by junior quarterback Landon Sims. In the semifinal game against Macon-East, Sims threw for three touchdowns.

On the Chambers side, the Rebels are led by Payton Allen, who is having the best year of his exceptional career. The senior has thrown for 2,843 yards this year and ran for another 1,090, totaling 27 touchdowns this season. Allen had one of his best games of the season against Edgewood last Friday, finishing with more than 400 yards and four touchdowns in the win.

The other matchup is the running back battle. Escambia is led by Ja’Daniel “Bubba” Nettles, while Chambers is led by Jordan Benbrook.

Last Friday, Nettles finished the game with a pair of rushing touchdowns. Benbrook has been a daunting figure for opposing defenses, as he has more than 1,200 yards and 22 touchdowns this year.

Even though Chambers has two rushers that have eclipsed 1,000 yards, it has shown its ability to have a balanced play call, which is something that the Rebels haven’t had in several years. Three of the Chambers receivers have surpassed 500 yards while leading receiver TY Trammell is nearing 900 yards.

Jason believes that ability to stay balanced will be a big difference-maker in Friday’s game.

“It makes it easier to run the ball because they have to keep that safety high, and that’s one less guy they can put in the box,” Jason said. “I expect Escambia to play hard and play the run pretty heavily, because they know if they don’t it’s really hard to stop us. They’re going to be aggressive defensively, and we have to be ready for that.”

“We aren’t one dimensional like last year,” Payton added. “We can throw and run it. We have a great offensive line and guys that can run and catch.”

The championship game will be a little different for the Rebels this time around, as they are playing at a different time and location than the past years. Chambers will kickoff vs Escambia at 3:30 CT at the Cramton Bowl in Montgomery.

The last few championship games have been played at noon in Troy.

“Both are abnormal, so I really don’t put a whole lot of stock in that,” Jason said. “Both teams have to line up at 3:30 and play. It’s going to be different for them as well, so we’re just excited to be in the game. It’s a great opportunity. Any time you get to play for a state championship, that’s huge and you don’t take it lightly. You don’t take it for granted because you never know when you’re going to get back.”