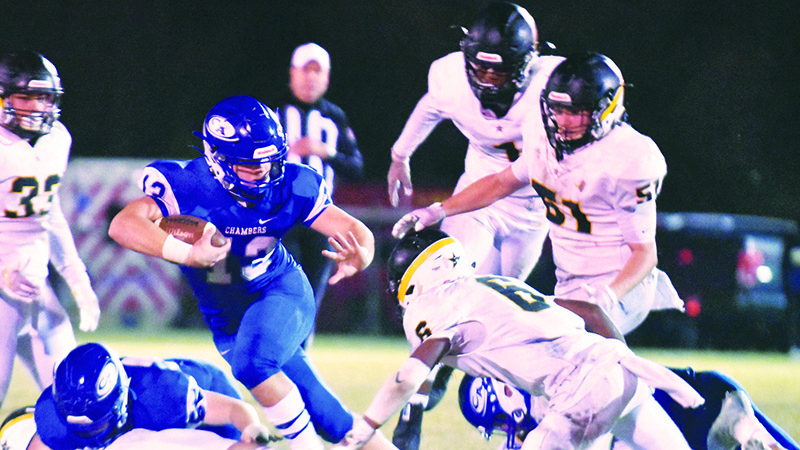 Down go the champs.

The Chambers Academy Rebels put up 28 first-half points and rode that momentum into the second half, finishing off Autauga Academy 43-3.

“I thought we came out and made a statement,” head coach Jason Allen said. “We ran the ball. The first two drives, we pretty much ran the football the entire time. We didn’t think they’d be able to stop us running the ball. Once we got a little lead, we started opening it up and throwing it a little more. I was proud of the way our guys played. To give up three points to a really good offensive team that can throw the ball around the yard, it’s a great first round win for us.”

The Generals had won the previous two AISA 2A State Championship games, but with a lot of new faces in 2020, they struggled for most of the season. However, they were still the defending champions.

Coming into the game, the Rebels knew they had to play well to win, and they showed they could dominate.

Chambers scored on their first two possessions of the game, both times set up by junior receiver TY Trammell.

On the first drive, Trammell was able to get the Rebels inside the Generals 25-yard line with a long run along the left side of the field. Senior quarterback Payton Allen capped off the drive with a 25-yard run, where he was able to avoid a pair of General defenders with a nice juke move to give him some space.

On the second drive, Trammell once again had a long run. This time the junior fought his way through arm tackles and powered his way to the goal line but was stopped just short. Junior running back Jordan Benbrook finished the drive with a one-yard score.

The Rebels scored two more times in the opening half. With a little more than six minutes left in the half, Payton Allen launched a pass to junior receiver Jeremy Conway, who made a great play on the ball, making an over-the-shoulder catch with a defender draped on his back, for 40 yards.

With a little more than 20 seconds left in the half, Benbrook scored again, fighting his way through a would-be tackler for a five-yard score.

Benbrook finished the game with 74 yards in the game. His two touchdowns gave him 20 on the season.

After getting close on two drives, Trammell finally broke through in the second half. The junior started the third quarter with a 58-yard kickoff return, which brought the Rebels down to the Generals 37-yard line. He scored on a play later on a screen pass that he took the remaining distance.

“TY is a great player but first and foremost, he’s a great kid,” Allen said. “He deserves everything he gets. He’s just really electric with the ball in his hands. If he gets out in the open, most of the time they’re not going to tackle him.”

The Rebels scored their final points with 54 seconds left in the third quarter, as Payton Allen threw his third touchdown of the game, hitting Josh Holliday in the end zone. Holliday made a great play on the ball, catching it with a defender right on top of him.

Overall, the Rebels defense allowed just three points, but they did give up some chunk plays, which Allen wants to get cleaned up before the state semifinal game.

“I was kind of disappointed with our secondary,” Allen said. “We left some guys wide open at times. We started doing some stuff, and we got on them at halftime about missing assignments and things like that. I thought we tightened up a lot in the second half.”

The Rebels were able to get two sacks and intercept three passes, one each by Hayden Hurst, John White and Cade Tarver.

Senior Jacob Oliver finished with a team-high 10 tackles, giving him 102 on the season.

The Rebels will get a chance to avenge their only loss of the season next Friday, as they host Edgewood, who defeated Patrician 35-34.