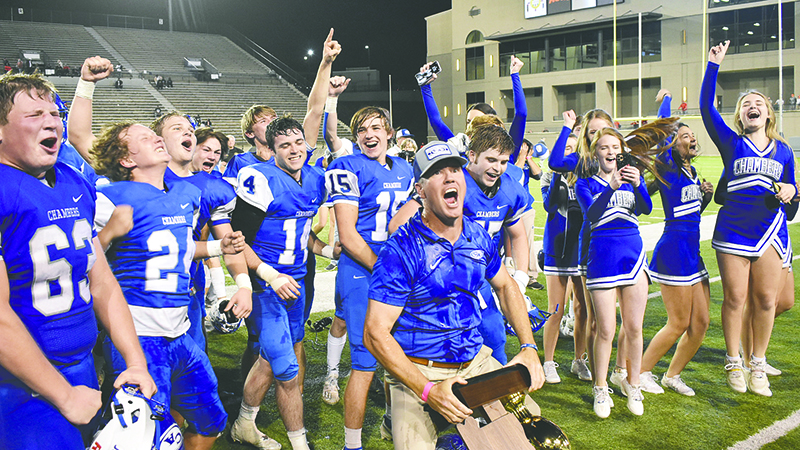 For the second time in three years, the Chambers Academy Rebels are football state champions.

Playing in their sixth straight state title game, the Rebels held on late for a 36-34 victory over Escambia Academy Friday in the AISA Class 2A title game at Cramton Bowl in Montgomery. Chambers Academy had not had great luck in state title games, but the Rebels changed their luck Friday, winning for the second time in those six appearances.

Almost exactly one year to the day, Chambers lost in the state championship to Southern 14-8. In that game, special teams played a big role in the loss, as a shanked punt and a kickoff return resulted in all of Southern’s points in that game.

Special teams played a huge role in Friday’s win, but this year, the bounces went the Rebels’ way.

“We put them in the right place. Players just have to play, and they played tonight,” Allen said. “They played out of their minds. They just kept fighting until the end. We knew we had a great game plan, and we knew they had a great team.”

After scoring a touchdown with 4:54 left in the third quarter, Chambers Academy recovered an onside kick. The ball hit off the right of kicker Chance Wilmoth’s foot and sophomore Braxton Yerta scooped up the ball just moments before it rolled out of bounds.

With less than two minutes left in the game, the Rebels were at their own 47-yard line faced with a fourth down. Allen said that the Rebels needed to keep possession of the ball because he didn’t know if their defense would be able to stop the Cougars, who had all the momentum in the game. Lined up in punt formation, the Rebels ran a fake. The ball was snapped directly to TY Trammell, who was lined up just to the left of the hashmark. Trammell picked up the first down to keep the drive alive.

Finally, with 38 seconds left in the game, Yerta again made a huge play, recovering an onside kick to seal the game.

“We hadn’t worked on the hands team very much, but we put one together,” senior quarterback Payton Allen said. “A big-time play by [Yerta]. We wanted to win, and I think we did a good job.”

Even though there were some scares in the second half,  Chambers Academy took the lead and held onto it for good with 1:01 left in the opening quarter. Payton Allen rolled out to his right and found fellow senior Josh Holliday, who snuck across the field and was wide open for a walk-in touchdown from six-yards away. The two-point conversion gave Chambers a 16-14 lead that it held for the remainder of the contest.

Throughout the game, it seemed like the team with the final possession would win the game, as the two teams traded touchdowns for the first four drives of the game.

Escambia took the lead on a two-yard rush by Bubba Nettles just 2:41 into the first quarter. The Rebels answered in less than four minutes, as junior wide receiver John White found a seam across the middle of the field. White caught a ball in stride at the Escambia 40-yard line and went untouched for a 48-yard touchdown reception.

A long 40-yard run by Nettles put the Cougars back in front, but a botched point-after attempt made the score 14-8.

Holliday’s touchdown reception was about a minute and a half after Nettles’ second touchdown of the game.

After getting a crucial stop on defense, including a touchdown called back and a couple of dropped passes from the Cougars, Chambers quickly went down the field and added to its lead with a touchdown pass from Allen to Trammell.

At halftime, the Rebels led by eight, but on Escambia’s first play of the second half, Nettles plunged his way up the middle, shook off a Rebel defender and went 81 yards for a touchdown.

Once again, the Rebels needed to find a way to score, so they called Payton’s number. The senior faked a handoff and hit junior running back Jordan Benbrook for a 31-yard pass. Benbrook scored a few plays later, running up the middle for a one-yard score, rebuilding the lead to 10 points with about five minutes left in the third quarter.

Midway through the fourth quarter, Escambia scored again, as Nettles scored from one-yard out.

Chambers scored its final touchdown of the game with 2:27 left in the game. Se tup by Trammell’s fourth-down conversion, Chambers was deep in Escambia territory. On third down, Payton stepped back and surveyed the field. Eventually, he found Benbrook on a wheel route, that the junior had cut short and went back to the quarterback. From there, Trammell scored on a pitch play, going untouched for a 28-yard score.

Nettles scored his fifth touchdown of the game with 38 seconds left, but the failed onside kick gave Chambers Academy the win.

The 2021 senior class has won a lot of games in their four-year career, but there are very few teams that can finish their career with a state championship win.

“This is my favorite game of my career,” Payton said. “We went out on a win with a state championship. We’ve been striving and looking forward to this moment before summer workouts [started]. It’s beyond just the players on the field. It’s the coaches, people in the stands. There are so many people involved in this program.”

In the final football game of his high school career, Payton had one of the best games of his career. The all-time Chambers Academy passer finished with 355 yards through the air and a team-high 86 yards rushing (441 total yards) and four touchdown passes.

The Rebels added some big playmakers this offseason, and they showed out in their first AISA championship appearance.

Trammell finished with 128 receiving yards and 20 yards on the ground adding his two touchdowns.

“TY is an amazing young man,” Jason said. “He is one of the humblest, nicest, well-mannered kids that I’ve ever been around. That son of a gun can run. He had a huge game for us tonight.”