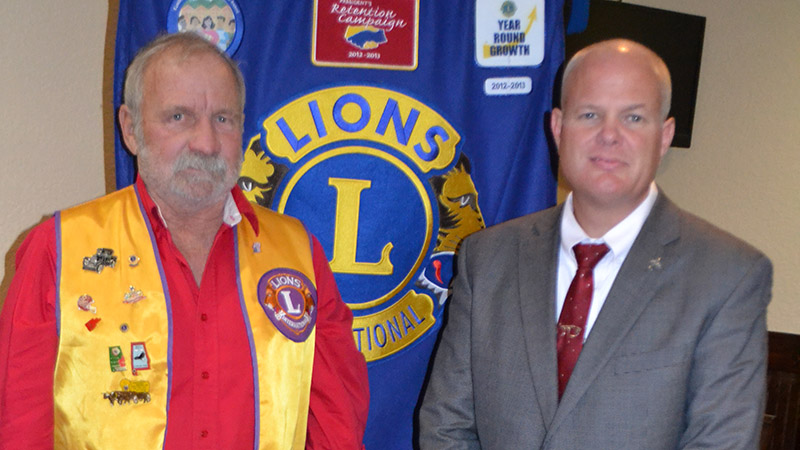 VALLEY — On the eve of his election victory in the race for Chambers County Superintendent of Schools, Casey Chambley was the guest speaker at a meeting of the Valley Lions Club held at San Marcos Restaurant. There was no talk of politics. Instead, he talked about something he’s best known for, his fireworks shows.

Chambley told members of the club that he pretty much grew up around fireworks shows.

“My dad used to have fireworks displays on the backwater (Lake Harding),” he said. “He used to have a professional group come in from New Castle, Pennsylvania to do them, and I used to like to watch them set up. I was probably no more than seven or eight years old at the time.”

Later on, his dad would get into it, and he would help him. The first show he did by himself was for a birthday party in Lanett. Since then, he has done fireworks shows for many Fourth of July events at Valley Sportsplex, and he’s done them for events such as family fun day at Kia. One year, he did back-to-back-to-back shows in Luverne, Opelika and Valley on July 2, 3 and 4.

“A lot of people think we do our shows with commercial fireworks, the kind you can get at the big fireworks stores. That’s not true,” Chambley said. “We use Class B fireworks that have to be approved by the ATF. It takes at least a month-and-a-half to get the permits you need to do a show. A fireworks show is not something you do on the spur of the moment.”

It can take many hours of hard work to set up for a show. It takes at least six hours to wire everything to a switchboard.

The show he did on Labor Day weekend in Lanett took 34 hours to set up.

It’s hardly a one-man job. He has a team of employees assisting him, and there’s a fire truck standing by in case something catches fire on the ground.

Not everything is perfect at a show.

There’s some training that goes into having fireworks shows.

“Experience is the best teacher,” he said. “There’s a lot you have to go through with the regulations. You have to have a state permit before you can fire a shell, and it costs $2,500. You have to have liability insurance, and that’s high. A single, 12-inch shell can cost $300. I am not in this to make money. I do it because I enjoy it.”

According to Chambley, a 12-inch shell weighs around 45 pounds. When ignited, it goes an estimated 1,200 feet into the air and explodes over a 100-yard area.

“We fire no more than one or two of them per show,” he said. “We are very careful in everything we do.”

The big shells are fired from casings made of steel or high-density polyethylene. PVC is not a good option.

“It can explode into shrapnel,” Chambley said.

Some of the more crowd-pleasing shots are fired from four-inch mortars. Up to six shots can be fired into the air at one time.

The reward comes when the grand finale takes place. The smoke is clearing and an appreciative crowd is cheering loudly for what they have seen.

“We do it for the people,” Chambley said. “When you hear the cheering at the end of the show, it makes you feel good. It lets you know you have made their time worthwhile.”

Old-timers remember Chambley’s dad, George Chambley (Sr.), from his days at Valley High. He was a star player on Doug Lockridge’s 1962 state championship football team. Casey’s mom, Gail, was a cheerleader at Valley High at the time. He has two brothers, George Jr. and Scotty, and a sister, Ginger.

After graduating from Valley High, George Sr. played football at Gordon Military College in Barnesville, Georgia. There were times when his parents would drive over to see him play on a Saturday after working the third shift at Fairfax Mill.

“Fireworks shows are interesting,” Chambley said, “I don’t know how long I will be doing them, but I have really enjoyed it.”