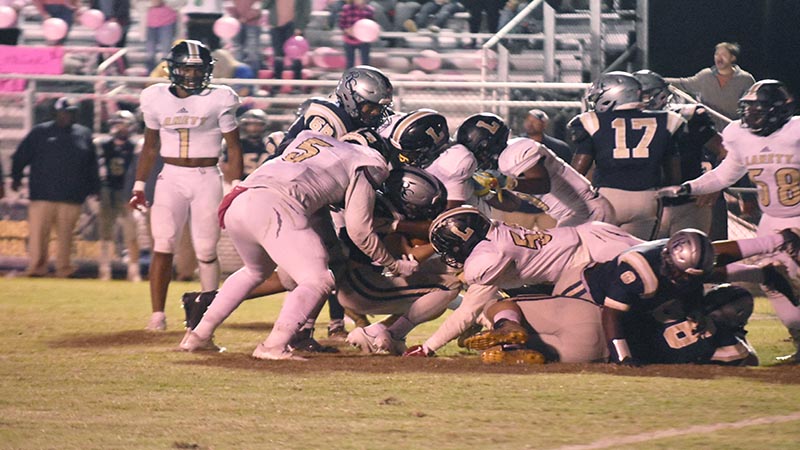 For the last four years, the Lanett Panthers have had an extremely explosive offense that would be able to put a game out of reach at any point. In those four years (2016-19), the Panthers have scored 2,200 points in the 55 games, for an average of 40 points a game.

While the 2020 Panthers have shown that same explosiveness, averaging 38 points a game, the defense has been the team’s calling card all year.

“The Black Bandits, what they call each other, put a lot of emphasis and pride in defense,” head coach Clifford Story said. “What’s so intriguing about [the group] is they take scoring personal. It really hurts them for a team to score on them. What I do like about them is they don’t make excuses about somebody not doing their job. When they’re talking and they’re communicating, they’re always so locked in when it comes to film preparation, so they know what’s going to happen in the game. I know we’ve always had a good defense. Coming into the year, I knew the defense was going to have to carry us in some games, and they’re still going to have to do it. For them to be playing the way that they are playing, it is just positive energy moving forward.”

Playing solid defense is something that isn’t new for the Panthers. From 2016-19, the same span that the Panthers’ offense scored 40 points, the defense allowed just under 14 points per game.

“Whenever someone scores, it’s heartbreaking,” senior middle linebacker Kelvin “Geico” Zachery said. “For me as a middle linebacker, I’m supposed to make every tackle. When I miss a tackle, I feel like I didn’t do my part as a leader.”

From the 2019 team to this year’s team, the Panthers defense has familiar faces in different spots this year. Senior Kadarius Zackary moved from cornerback, where he was named to the Alabama Sports Writers Association All-State First-Team, to safety. Seidrion Langston, who was an outside linebacker in 2019, has moved over to the other safety spot. The moves have opened doors for Jay Gibson and Makel Patrick to take over the roles of outside linebacker and safety respectively.

Those familiar faces have won a state championship and have built the chemistry needed to make another playoff run, even though there are some new faces on the team.

“Over the summer workouts and just being out here, we learned how to work together well as a unit,” defensive lineman Jadon McCullogh said. “As the season progressed, it just got even better to where it put us in a position where we’re in the first round of the playoffs hoping to take it all the way.”

Patrick is a transfer that has made a big difference in the secondary, as he has been a solid piece on the other side of the field from Larontavious “Tae-Tae” Hurston.

The Panthers’ defensive success starts with the freshmen, as they go up against the starters in practice every day.

Those freshmen grow into the juniors and seniors that are dominating on the field because they’ve been facing top competition the last two or three years.

Williams said the seniors on the team show that growth and development.

“This group of seniors was the ninth graders in 17, so they saw everything,” Williams said. “They saw how the team in 17 put their pants on, put their jerseys on their shoulder pads and tied up their cleats. They just took it and went from it. They have a chance to win three rings in four years, and a lot of teams can’t say that.”

The Panthers are home for their first-round matchup against J.U. Blacksher on Friday.