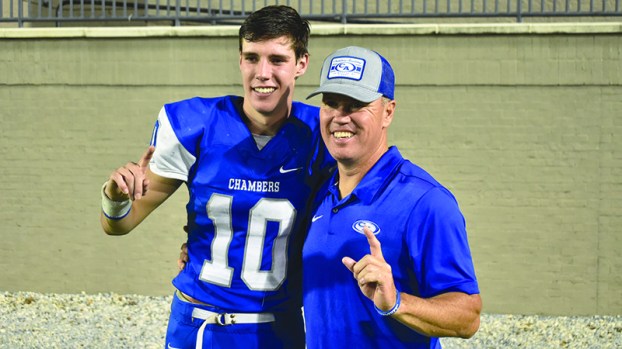 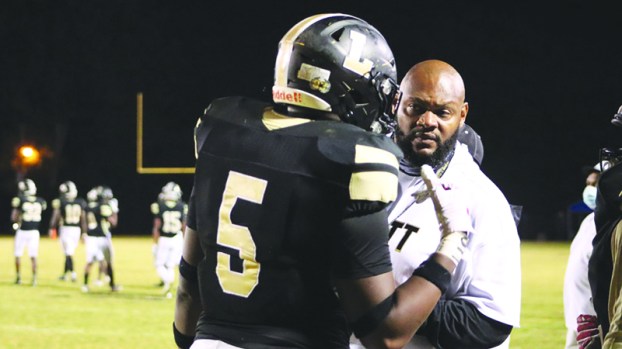 At any level, getting a chance to coach a son or a daughter is a special experience for a parent. For the last several years, Head football coaches Clifford Story and Jason Allen have had an opportunity to coach their sons at a high level, as both coaches have won two state championships in the last four years with their sons.

After more than 20 years of coaching, Valley head basketball coach Marshon Harper gets that opportunity as his son is now a freshman at Valley High School.

Shortly after Chambers Academy defeated Escambia Academy in the AISA Class 2A State Championship game, Jason stood just behind the south end zone with his son Payton. The two were posing for a couple of pictures.

During that short couple of minutes, Jason was telling Payton that this was a moment that they would be talking about for years.

It was Payton’s final football game as a member of the Chambers football team, ending his time on the gridiron playing for his father.

The two have played in four football championships together, but some of Jason’s fondest memories from previous state championships were before Payton was in pads playing for him.

Throughout his entire football and basketball career, Payton has had Jason as his coach.

“It’s been a great experience,” Payton said. “I’ve been playing for my dad my entire life, I haven’t had anyone else coach me. He’s always been there for me. I can remember as a kid, he would spend a lot of time with me, whether it was baseball, football or basketball. He was always there for me.”

Along with the lessons that Payton learned from Jason growing up about those positions, the two have been able to compete with each other for the better part of the last decade. Payton said the first time he was able to beat Jason one-on-one in basketball was his freshman year.

“He’s getting a little older now, so he’s kind of lost it,” Payton said. “He’s definitely a better basketball player than football player. He’s got a good job shot.”

Marshon has been coaching at Valley High School for more than 20 years, and in 2020, he gets the opportunity to coach his son Jameson.

Jameson is a freshman at Valley. He played football this year but didn’t get a chance to play on the varsity team. Like Marshon, Jameson is now in basketball mode, as he is part of an extremely talented freshman class that is already getting a chance to play in varsity games.

In the Rams’ second game of the season, Jameson scored his first varsity points, finishing with two points, two assists and two steals.

“The sky is the limit,” Marshon said. “He works hard. We lift weights at home. When everyone else is sleeping, we try to do extra work. I couldn’t ask for a better son.”

Jameson’s hard work showed during the summer as he grew about three inches and added about 20 pounds from lifting weights almost every day at football and with his father.

Even though Jameson has added some height and weight, Marshon said that he can still take his son in a one-on-one.

“He still can’t beat his old man yet,” Marshon said laughing. “I just back him down in the post and lay it up.”

With more than 20 years of experience as a head coach, Harper knows how much time he spends with his team and with his family. Now that Jameson is on his team, he gets the opportunity to be with his son more than before.

“He’s with me 24/7,” Marshon said. “I get to kind of keep my hand on him right there and try to teach him the fundamentals and how to do it the right way. He’s soaking it up right now. I hope when he becomes a junior or senior, we get a chance to sign that scholarship.”

Caden Story is the third and final son of head coach Clifford Story to go through Lanett. Clifford’s older two sons, Tre and Kristian, both have stared for the Panthers dating back to 2015 when Tre took over the starting quarterback position. Following Tre was Kristian, who became one of the best football players to come through the state of Alabama. Now, the Panthers have Caden, also known as Pop, who is a four-star recruit in his own right.

“It’s been a joy. It’s actually been an overwhelming experience,” Clifford said. “Sometimes it’s really hard to differentiate between daddy and coach. To be able to coach your boys on a high school level, that’s been something that I’ve wanted to do. It just gives you joy to see them go out on Friday night and to perform well in things they’ve always wanted to do.”

Growing up, the three Story boys just learned the fundamentals of football, because Clifford didn’t know how they would grow into their bodies. He taught them the basics of every position, but as they all matured, he started to focus in on certain positions. The two older sons played quarterback, while Caden is a defensive end.

“I always wanted all three of them to be my quarterback because if they’re going to pull the trigger for you, you want someone who can put your personality on the field. Caden just outgrew playing quarterback. Growing up, I never focused on them playing one position until they got older. I just wanted them to be fundamentally sound.”

All three boys grew into some of the best players in the area. As seniors, both Tre and Kristian have signed scholarships to play football. As a junior, Caden already has several offers from Division 1 programs from around the country.

Clifford is approaching 20 years as a head coach. In that time, he’s won a pair of state championships with Kristian at the helm. Caden was on both of those teams, actually getting a chance to take the final snap in 2017.

In the Story household, football is the most talked about topic, especially when Lanett is still playing.

Even though he said he gets coaches twice as hard because he gets it at home and school, something Clifford agreed on, Caden said that he just appreciates the time he gets to spend with his father no matter what is happening.

“I enjoy the time that I have with him because I don’t want to take any of that for granted. Whenever he wants to do something, I’m always just excited and happy to do it with him. We do a majority of things outside of practice and games together.”