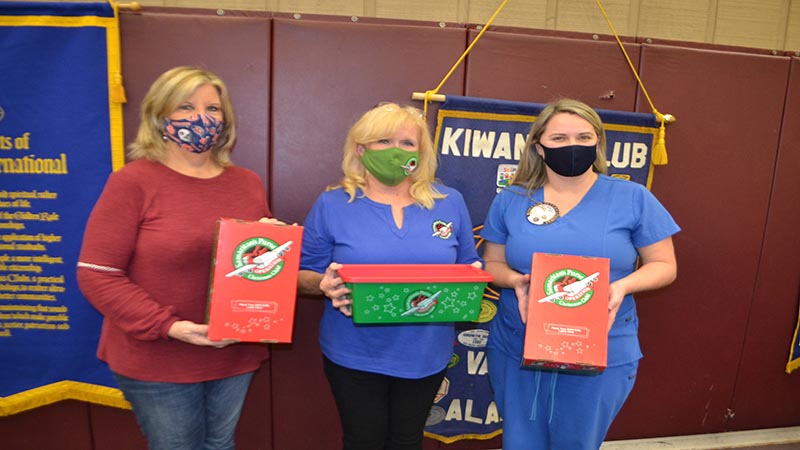 VALLEY — At Wednesday’s Valley Kiwanis Club meeting, Susan Otto talked about an organization she does volunteer work for that has touched the lives of over 23 million children since 1993. Operation Christmas Child is a unit of Samaritan’s Purse and has had great success in spreading joy across the world in something so tiny as a shoebox.

Otto told members of the club that in the summer of 1993, Samaritan’s Purse President Franklin Graham was asked if he could help the children of war-torn Bosnia. Pastor Ross Rhoads of Charlotte, North Carolina suggested placing a variety of items including toys, personal care items and some basic literature about Jesus in a shoebox. With the organizational ability of Samaritan’s Purse, more than 28,000 shoeboxes were filled that November and was distributed to needy children in the Balkans that Christmas.

These unexpected gifts were so well received that it created an impetus to fill more shoeboxes and send them to other deprived places in the world.

The cause kept growing over the years. Churches and volunteers from all over the U.S. joined the cause. Shoebox gifts passed the 100 million mark in 2012 and now exceeds 178 million.

Schools, civic clubs, businesses and individuals have contributed to this growing movement that has touched all corners of the globe.

The paper shoeboxes morphed into similar-sized plastic containers over the years. Something Otto tries to get into each box are school supplies.

“In some places, kids aren’t allowed to attend school unless they have their own school supplies,” she said.

Something else she puts in each box is anywhere from eight to a dozen pencils.

“I’ve been doing that after I heard of a young girl saying they had but one pencil in her class, and the students passed it around when someone wanted to write with it,” she explained. “A shoebox you pack may be the only gift a child ever receives. It’s best to pack quality items that last.”

The goal of Operation Christmas Child is to deliver the gift-filled shoeboxes by the Christmas season. There’s a big push right now to do that. National Collection Week is Nov.16-23, 2020, and anyone can help out.

Last year, an estimated 8.9 million boxes were filled in the U.S. and taken where they were needed. Of this figure, over 950,000 boxes came from the Southeastern states and more than 20,000 of them were shipped out of the local distribution site at West End Baptist Church in Valley.

“Franklin Graham has set a goal for this year of 11 million boxes,” Otto said. “Compared to other parts of the world, we are extremely blessed in this country.”

There’s a six-step process to participate in Operation Christmas Child: (1) get a standard-sized shoebox to pack for a boy or a girl, (2) select a quality “wow” toy such as a doll, soccer ball with pump or a stuffed animal, (3) the box can be packed full of other fun toys, hygiene items and school supplies, (4) pray for the child who will receive your gift and include a personal note and a photo of yourself to delight the child, (5) include a $9 donation per box to cover shipping charges and other project costs and (6) take the shoe box to a local drop-off location during National Collection Week (Nov. 16-23). West End Baptist is the nearest one in the local area.

“The little shoebox you send could last them for a long time,” Otto said. “The personal letter and the photo you send will mean a lot to them. Some of these children have never heard the name Jesus. Shoeboxes they receive will include books in their native language. What means the most to them is the knowledge they have that someone out there loves them and wants the best for them.”

Don and Donna Downs head up the distribution effort for West End Baptist. They will take a trailer filled with shoe boxes to Phenix City, where the boxes will be inspected and put on a tractor-trailer bound for an airport or the coast.

“These boxes will be put on an airplane or a ship,” Otto said. “They will be heading to countries all over the world. It’s a very interesting process. You can go to the Samaritan’s Purse website and see videos about Operation Christmas Child. It really touches your heart when you see it. The kids receiving the shoe boxes don’t have anything. It amazes them that someone from far away would send them a box full of neat gifts and would tell them about the gift of Jesus.”

Otto said that 2020 had been a very difficult year for us all, but that God had motivated local Operation Christmas Child volunteers to make an extra effort to help the children.

Otto said the Operation Christmas Child had a way of bringing people together.

“It’s a blessing to be on the giving and the receiving end,” Otto said. “When God gives you an opportunity to be involved in something like this, you need to do it.”

Shoe box gift ideas include toy cars, jump ropes, yo-yos, toys that light up and make noise, non-liquid hygiene items such a toothbrushes, bars of soap, washcloths and combs, school supplies such as pens, pencils, sharpeners, crayons and markers and accessories such as socks, sunglasses, jewelry and watches and flashlights with extra batteries.

Weapons of any kind, and items that could spoil or be potentially hazardous during a long trip are not permitted. Such items include seeds, food, liquids or notions, medications or vitamins, breakable items, glass containers and aerosol cans.