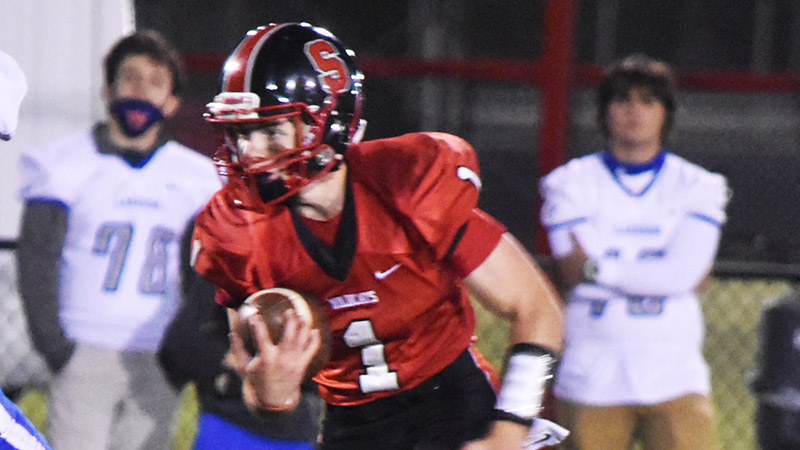 For the last three years, opposing defenses have been keying in on Springwood star running back OJ Tolbert, and for good reason, as Tolbert is less than 200 yards away from becoming the school’s all-time rushing leader.

This has been giving Kannon Key more running lanes and holes that he can burst through, especially in 2020.

“OJ’s been a big teacher for me,” Key said. “He came here our eighth-grade year, so we’ve been doing this ever since JV. You can learn a lot from him just because he’s such a good talent. It opens up a lot of holes for me.”

Key has been one of the most versatile players in the county in his high school career. The senior has played full back, running back, receiver, nose tackle, linebacker, defensive back and outside linebacker in his four years.

During the summer, Key said his favorite spot that he has played is nose tackle, something that is true to this day since he is a lot smaller than the opposing linemen and was able to use his speed against them.

“I can’t say enough good things about  Kannon Key,” head coach John Gartman said. “He’s a good athlete, but his intangibles are just off the charts. He’s very tough, gritty and very intelligent. He plays a lot of positions for us, and it’s not because of his physical ability is so great, even though he’s a good athlete. It’s just because he’s so smart and gets after it.”

Gartman said that Key is one of the smartest players that he’s ever coached.

Key shows his knowledge of the game throughout the week of practice and during the game. During practice, even on Mondays, he is able to call out certain plays. He also is constantly breaking down plays, asking coaches if something can work or trying to confirm which set the week’s opponent is normally running at a certain point in the game.

Earlier in the year, Gartman wanted to add the wrinkle of a shotgun set in his offense. It worked at the end of the 2019 season, but he wasn’t sure who was going to take then-quarterback Ethan Plank’s job.

He settled on his jack-of-all-trades Key.

“All the quarterback stuff I’m doing now is a lot of fun. I enjoy doing all the reads and being a bigger part in the offense,” Key said.

Even though the buck sweep is the focal point of the Wildcats’ offense, they have been able to run some read plays out of the shotgun, which allows Key to use his intelligence and make the best decision for the team.

“In the system, it’s kind of like being another running back,” Key said. “My reads are pretty simple.”

He showed that ability on Thursday against Lakeside, when he pulled a ball back from Tolbert and marched through a hole 40 yards for a touchdown.

“I think one of the big things, because it was fourth down, they were keying OJ hard,” Key said. “He’s such a good running back and it opens up so much for me. It makes the read easier for me. When I pulled it, there was a hole that anybody could run through.”

Key and the Wildcats face off against one of the top two teams in the AISA when they travel to Escambia Academy on Friday for the first round of the AISA AA playoffs.

“They’re very tough,” Gartman said. “Their quarterback and running back are especially dangerous. They’ve got a lot of speed. They’re very strong in every position. They’re probably the favorite in 2A, by we’ll go down there and see what we can do.”

Before becoming the Wildcats head coach, Gartman was the Cougars defensive coordinator, a job that won him a state championship.

The key for the Wildcats to pull off an upset victory will be to use up the clock, something the Wildcats’ running game has proven it can do against good teams.

The Cougars defeated No. 2 Bessemer Academy 33-12 in their final game of the regular season.

“When we’re on offense, we’re going to need to have good sustained drives and use up some of the clock,” Gartman said. “Hopefully, we can hold on to the ball and play good defense. Tackling in space is going to be important, so hopefully, we can do all of those things.”