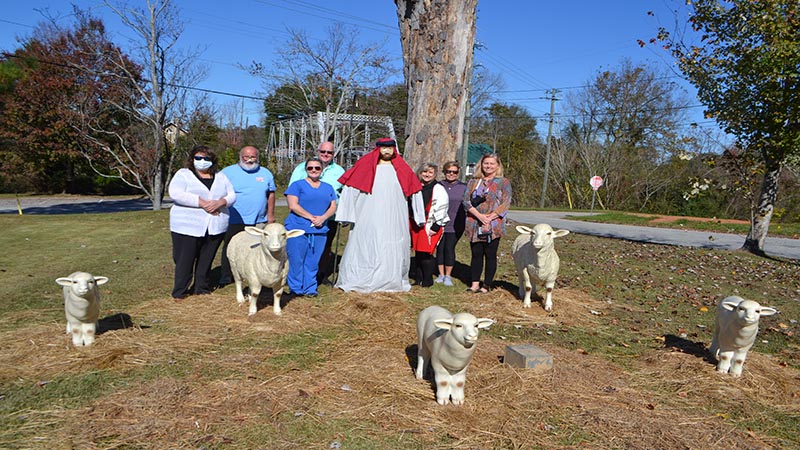 VALLEY — The Langdale Nativity has been a Valley Christmas tradition since the late 1940s. It was first displayed during the Christmas season in front of Langdale Mill. The location later switched to the portion of Langdale Meadow in front of the present site of Valley City Hall. It was a beautiful natural setting next to Moore’s Creek, but frequent flooding in the area caused extensive damage to the life-size Biblical figures, some of which were washed into the Chattahoochee.

An unlucky shepherd was saved from that fate one year when the hook on his staff caught hold to one of the concrete pillars on the Fob James Drive bridge. He was later rescued, given a good scrubbing and put back in the display.

Several years ago, members of the Kiwanis Club of Valley, the sponsoring organization, decided to forego the flood risk by changing the Nativity’s location to a hillside site between the Langdale Methodist Church and the historic Iron Bridge. It’s returning to the same site again this year.

A very noticeable difference this year is that the Nativity will be featuring what has to be the best-dressed group of shepherds, wise men, Joseph and Mary yet seen. Kiwanis Club members took on the task of dressing them during the noon hour on Monday.

Joseph is wearing a beautiful shade of green and Mary is in brilliant blue. The first wise man is leading his camel on foot and wears garments fit for a king. All of the figures are wearing head attire that was common during the period. It was applied by a staple gun on Monday.

The public is invited to come by and see the Nativity during the night time hours, but asked not to be walking

Several years ago, the Kiwanis Club received a $10,000 grant from the Charter Foundation. Most of that money was spent on the amazingly lifelike cow, donkeys and sheep that are on display each Christmas season.

Kiwanis Club members are also asking for the public to show some respect, both theologically and for the club’s needs, on something else.