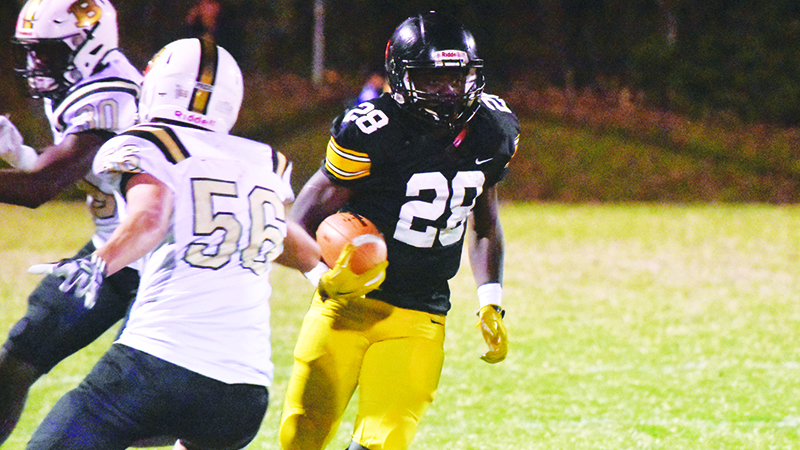 On a Friday night in LaFayette, the name Daniel is constantly being said over the loudspeaker at Bulldog stadium. Chunk play after chunk play on offense and on defense, there is either a tackle, interception or pass break up going to Daniel.

Most of the time, the only question is which Daniel.

“It’s good to play with him,” Ty Daniel said. “He pushes me and I push him. We just love the competition.”

Jay Daniel started as one of the team’s starting wide receivers, but with injuries and a needed power running game, he moved into the backfield with his brother Ty.

“Our connection is like Shaq and Kobe,” Jay Daniel said. “I’m glad he’s back there with me. He gives me the ball more, and I can make plays out of the backfield.”

Competition is something that both brothers thrive in, as they are able to make plays in all areas of the game. Even inside a football game, the two brothers are competing against each other, so one can say they had a better game than the other.

They showed that competition against Vincent in their final regional game of the year. Jay finished with more than 200 yards rushing and three touchdowns, while Ty also had three touchdowns on 152 yards of offense. Ty added two interceptions and four pass breakups in the game.

“Say he makes a big throw, I have to make a big run or make a spectacular pick or something like that,” Jay said.

If you ask each brother who is the better player it’s a simple answer.

“Me no doubt,” Jay said with a smirk. “Just check the stats.

The pair have showcased what they can do all season, but have done even more since Jay moved positions. In their first four games, the Bulldogs offense was stagnate. Once Jay moved spots, the running game started going, which allowed Ty time in the pocket and opened up holes for him to do quarterback draws or reads.

“I like it because there have never been two brothers in the backfield like [like us],” Ty said. “He just pushes me. If he makes a play, I have to come back and make another one.”

For Jay, the move gave him the ability to show what he can do as a ball carrier and in space.

“It’s easy for me because I have vision,” Jay said. “I know where the sticks are at, I know when to get the first down and when we need a big play. I have good cuts and everything, which I learned from [assistant coach] Dee Mackey. I want to show everybody that I’m a real deal athlete. I can do it all.”

The offensive turnaround has been key for the Bulldogs, as they turned an 0-4 start to the season to a 5-4 record to end the regular season.

In their final regular-season game, the brothers showed what they can do again, even though Ty was dealing with an injured ankle for most of the game. Jay ran for 77 yards on the ground for two touchdowns and an 85-yard kickoff return for a touchdown. Ty finished with 125 passing yards.

The Bulldogs travel to Leroy for their playoff matchup.

Leroy finished as the No. 3 team in 2A and easily won their regional championship.

LaFayette’s coaching staff has called the Bears the mirror of LaFayette. They run a lot of the same type of offensive sets and even wear the same yellow and black jerseys that the Bulldogs do.

Friday’s matchup will be the first time the two teams have matched up.

The Bulldogs are hoping to keep their five-game winning streak and their season alive on Friday. Kickoff is at 7 p.m. CT in Leroy.