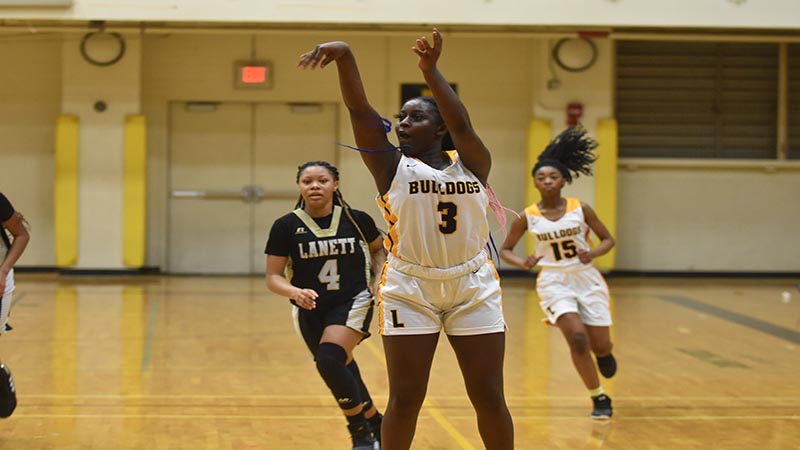 Last season, it took a little bit of time for the LaFayette girls basketball team to start buying into head coach Fred Bridges’ system, but once they got more comfortable with it, the team started rolling. After starting 0-5, the Bulldogs rallied after the first of the year, winning eight of their next 11 games to finish the regular season.

They continued their hot streak into the playoffs, as they advanced to the regional round of the playoffs for the first time in more than a decade before losing to the eventual 2A champion Collinsville.

“We feel like we have unfinished business to accomplish,” Bridges said. “Looking at last year, we finished strong, winning the area and going to Jacksonville. We’re really excited about completing the task at hand. Unfinished business — that’s our team motto this year.”

The 2020-21 team brings back all but one player from last year’s team, as Monkeliyah Morgan was the only starter on the team. While the team will miss Morgan’s leadership, it now has five seniors ready to take on that leadership role.

“The older girls are setting the precedence for the leadership. The atmosphere is just charged,”

Feliah Greer is taking the center stage for her final year at LaFayette. The senior has been one of the best players in the county since her freshman year and has been named an Alabama Sports Writers Association All-State selection every year since. As a junior, she was named to the second team.

Alongside Greer, the Bulldogs return Ebony Williams and Alahbra’J Todd who will take on more prominent roles this season — roles they grew into as last season progressed.

“We know that Feliah is going to get double-teamed, so we teach everyone that they have to contribute,” Bridges said. “There’s going to be some role players. Some of the girls are going to give us 10 plus points, others this many rebounds. We have to make it fit as a puzzle. If they focus only on Feliah, then we have Ebony. She can step up and give us 15 points. Then, you have Alahbra’J Todd, who can give us 10 to 12 points. We have that nucleus around us.”

For the Bulldogs to take the next step and get past the second round of the playoffs or even reach Birmingham this season, Bridges feels his team needs to take care of their bodies and take care of their work in the classroom. If they can stay healthy and not have to worry about controllable variables, then Bridges likes his team’s chances to take another step.

“The key to the next step is to keep everybody healthy,” Bridges said. “We’re student-athletes first, so they have to look at the academics and make sure we cover those bases then we can really focus on the task at hand. Everybody is excited.”

LaFayette will start its quest to take care of business this season on Dec. 4 against Handley.

“I feel like that momentum is still shifting our way going into the start of the season,” Bridges said.