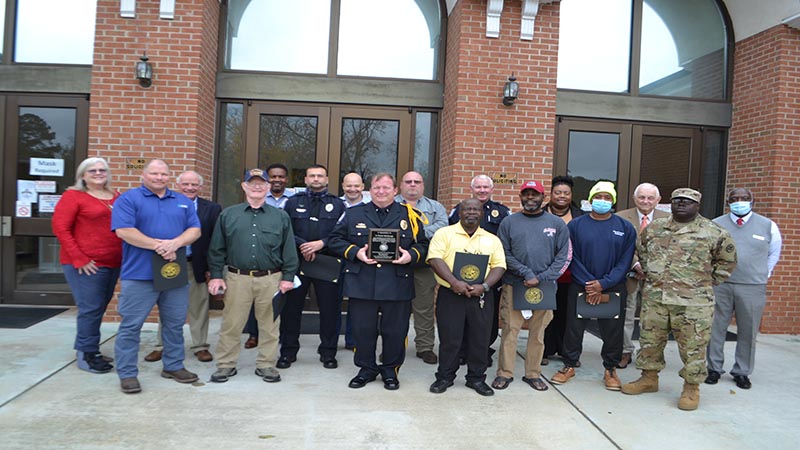 LANETT — In a Tuesday afternoon Veterans Day program, the City of Lanett honored a total of 16 employees who have served, or are currently serving, in the U.S. armed forces. Also receiving certificates of recognition were some local residents who retired from the military with many years of service. The guest speaker for the day, Lt. Pat McCullough of the Lanett Police Department, received a plaque from Mayor Kyle McCoy in appreciation for his service in the U.S. Army and with the city.

“It’s always an honor to speak at a Veterans Day program,” McCoy said. “Today, we are honoring the men and women who have defended our country and kept us safe from harm.”

“We are in a traditional, peaceful exchange of power,” he said. “This is what our soldiers have fought for since the Revolutionary War. On this special day, we thank our veterans, our employees who have served and those who are currently serving.”

“Veterans are special because they leave their families to fight for our country,” Wood said. “They fight to defend our freedom. They fight for us, our children, their families back home and for millions of freedom-loving people around the world who can’t fight for themselves. We are honored and truly blessed to have so many men and women of this high caliber in our family here in the City of Lanett. It is my honor and privilege to introduce as our guest speaker one such man. He comes to us by way of the U.S. Army.”

Lt. McCullough served five years in the U.S. Army and rose to the rank of specialist. He was in the Military Police (MP) Corps and served two deployments in the Balkans. He was later assigned to Fort Bliss in Texas, where he was a traffic accident investigator. He received the Meritorious Service Ribbon and the Army Achievement Medal. He is currently serving as a lieutenant in the LPD’s criminal investigation division. Lt. McCullough is married and has three children.

Lt. McCullough began by thanking McCoy and the council for continuing a longstanding Veterans Day tradition in Lanett of honoring veterans who are now working for the city. “Thank you to all who are here today who have served in the military,” he said. “The network of family and friends who remain at home and support our men and women in the military enable them to focus on the mission. There are 17.4 million veterans in the U.S., 373,449 of them being from the state of Alabama. Alabama is among the states with the highest per capita veteran population. This reflects our state’s willingness to serve and our love of country.”

McCullough said he didn’t consider himself a veteran while he was serving.

“When veterans were asked to stand and be recognized, I often remained seated,” he said. “I just wanted to sit there and applaud what I considered ‘the real veterans.’ I had not fought in any battles, lost any buddies to enemy fire, been wounded or really suffered. Who was I to be recognized alongside men and women who had?”

Over time, he began to see things differently.

“Being a veteran isn’t about what makes our service different, it’s about what makes it the same,” he said. “All veterans have experienced some level of separation from family and friends, fear, hurry up and wait, eating something that came out of a brown plastic bag and many other things that will get a knowing look from another vets when stories about time in service are told. Love of country, service to others and kinship are common threads to all veterans, I believe this is true from Bronze Age warriors with spears and shields to the current era. It’s something that will remain true as long as men and women answer the call to service and to defend their country.”

McCullough noted how former veterans had impacted the culture and politics of America.

“Celebrities like Ice-T, Steve McQueen, Morgan Freeman, Drew Carey and Adam Driver are just a few of the veterans who have had a huge impact in the entertainment industry,” he said. “The halls of Congress are filled with veterans like Tulsi Gabbard, Tammy Duckworth, Richard Blumenthal, Dan Crenshaw and Mitch McConnell, just to name a few. How could we ever hope to fully understand the benefit veterans have had on our society? The skills and life experience they have gained while serving the country continues to pay dividends to our nation even after their military service has ended.”

McCullough referenced remarks made by President Ronald Reagan in a radio address on Veterans Day in 1983.

“Each time our nation has called upon our citizens to serve the best have come forward,” he said. “Words cannot express our gratitude and admiration. But we can and should take the opportunity on this Veterans Day to remember their gift to us. When you see one of our young men and women in uniform on the street or someplace, how about a smiling ‘hello’ and maybe a ‘thank you?’”

“Better than anyone else,” said McCullough, “veterans know the price of freedom, for they have suffered the scars of war. We can offer them no better tribute than to protect what they have won for us. That is our duty. They have never let America down. We will not let them down. Let us all remember to thank our veterans, and when we do so, pledge to them in our hearts not to let them down.”