Lanett loses to Leroy, season ends in third round

Just as they did in their 2017 state championship matchup, the Lanett Panthers fell behind Leroy by two touchdowns. In 2017, the Panthers were able to storm back and defeat the Bears, but on Friday night, the Panthers couldn’t take the lead, losing 28-21 on the road in the third round of the AHSAA playoffs.

“We just were out of character,” head coach Clifford Story said. “We just made costly mistakes in bad situations. We resulted back to early mistakes that we were making early on. It was a tough environment don’t get me wrong, but we just didn’t play well. I take my hat off to Leroy. They had a great gameplan. [Kelston Fikes] is a helluva running back. He knows how to find holes. We had chances, but we didn’t know how to capitalize on them. In order to play in that environment and beat a good team, the things we did tonight— you can’t do and think you’ll move forward. We just did not play Panthers football.”

Issues that caused Lanett problems early in the year (penalties, missing easy plays and blocking) came back to haunt the Panthers on Friday.

“It was extremely big because I knew that we would have chances [to score] based on things that they were giving us in the first half,” Story said. “I just had to tell the kids to lock in and focus. I can’t make any excuses, we didn’t play well.”

Leroy started with the ball and controlled it for most of the quarter, allowing Lanett to run just a handful of plays in the opening quarter.

At the end of the first, Leroy led by a touchdown. Early in the second quarter, the Bears scored again, going up 14-0, the largest deficit Lanett has faced this year.

But the Panthers didn’t roll over. Lanett scored its first touchdown with roughly three minutes left in the opening half. It tied the game at 14 early in the second half.

Following the Lanett touchdown, Leroy took over inside its own five-yard line. The Bears proceeded to march down field, scoring on a fourth-and-five play.

“They’re two-time state champions,” Story said. “I couldn’t ask for a better group of guys. They just understand what we wanted to do. I take my hat off to them. We’re going to have a few guys that are going to be playing at the next level. Moving forward, they’re just going to make sure they lock in on their grades to give them a chance to play on some Saturdays in somebody’s program.” 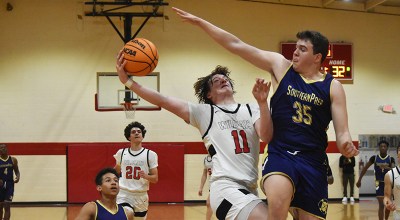