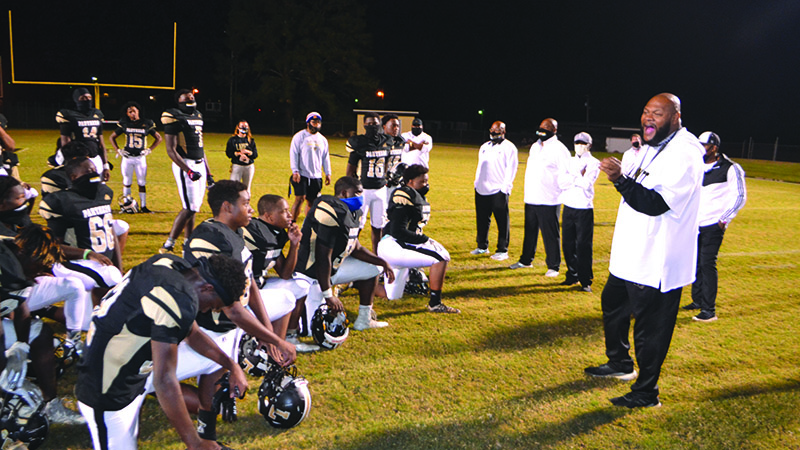 LANETT — The Lanett Panthers got their 2020 playoff run off to a good start with a 51-7 blowout win over the J.U. Blacksher Bulldogs Friday evening at Morgan-Washburn Stadium.

Making big plays on both offense and defense, the Panthers roared out to a 39-0 halftime lead and added two more scores in a time-shortened second half.

The win improves Lanett’s record to 9-2 on the season and advances them to a second-round game against the winner of the Luverne-G.W. Long game

Coach Clifford Story was well pleased with the play of quarterback Kadarius “K-Zack” Zackery, running back D’Quez Madden and both the offensive and defensive lines.

“I saw a lot of good things tonight,” he said. “We had complete games on both offense and defense. We will make a commitment to a game plan on Monday for our next game. When you are in the playoffs, each game you play will be more difficult than the last one.”

On Lanett’s first offensive play, Zackery kept the ball off the right side of the line on a 72-yard scoring play. A point-after kick made it 7-0 with 4:58 showing in the quarter.

The visitors had moved the ball well on their first series only to turn the ball over on the Lanett end of the field. On their second possession, stellar play by the Panther defense forced them into a fourth and 40 inside their 10. They punted to Lanett, and the Panthers put the ball in play at midfield. After a three-yard run on first down, Zackery connected with wideout Larontavious “Tae-Tae” Hurston on a screen pass to the right side of the field. The fleet received made some nifty moves to avoid being tackled and was quickly in the secondary on his way to a 47-yard scoring play.

It took only three plays on offense for Lanett to have a 14-0 lead.

Lanett made it 20-0 on the first play of the second quarter, this time on defense. A miscue on offense by the Bulldogs had the ball free on the ground, and Lanett’s 6-foot-4 defensive end Caden “Pop” Story scooped the ball up and raced 35 yards for a score.

With 11:32 left before halftime, Lanett had jumped out to a three-score lead. It wouldn’t get any easier for the Bulldogs.

They once again left the ball on the ground. This time Alanteo Cheeks picked it up for the Panthers and ran it back 35 yards to the J.U. Blacksher 10-yard line before being brought down.

On the first play from there, Madden took a toss sweep around the right side and made it just inside the pylon in the east end zone for Lanett’s fourth TD of the game. That made it 26-0 with 8:07 left in the half.

The shellshocked Bulldogs fumbled the ball again on their next possession. Trey Abner recovered for Lanett at the J.U. Blacksher 33.

Abney made a big play on offense on the very next play from scrimmage, hauling in a pass from Zackery and taking it down the hoe sideline to the Bulldog’s 10-yard line. Two plays later and the Panthers were in the end zone on a six-yard run by Madden. Luis Bonilla’s third PAT made the score 33-0 with 5:55 left in the half.

The Bulldogs advance the ball to midfield on their next possession before having to give it up on a punt. Lanett put the ball in play on their 15 with less than two minutes to play in the half, but they only needed a few seconds to score one more time. On second down from the 23, K-Zack got loose on an amazing run off the left side of the line. He made some terrific moves to avoid a couple of defenders and when he made it to the sideline and saw that east end zone on the Kroger side of the 50. The 73-yard scoring run made it 39-0 with 1:42 left in the half.

The game was well in hand at halftime, but the Panthers did put two more scores on the board in the second half.

Backup quarterback Markavious Atkinson found Hurston on a 34-yard screen pass to the right side of the field for the first score. That made it 45-0 with 6:10 left in the third quarter.

Story made another big play on defense to stymie the Bulldogs on their next series. Following a punt, the Panthers put the ball in play at midfield. Plenty of Panther reserves were in the game by this time. They were fresh and eager to play against a very tired and beaten down defense. It took them only a couple of plays to make the end zone.

Donnavin Shealey picked up 20 yards on one play and Montavious Dunson ran 30 yards for the final Lanett score. That made it 51-0 with 2:10 left in the quarter.

J.U. Blacksher salvaged some pride by scoring a lone TD in the game’s fading minutes. They added the point-after to make the final 51-7.

The Panthers will host GW Long next Friday.