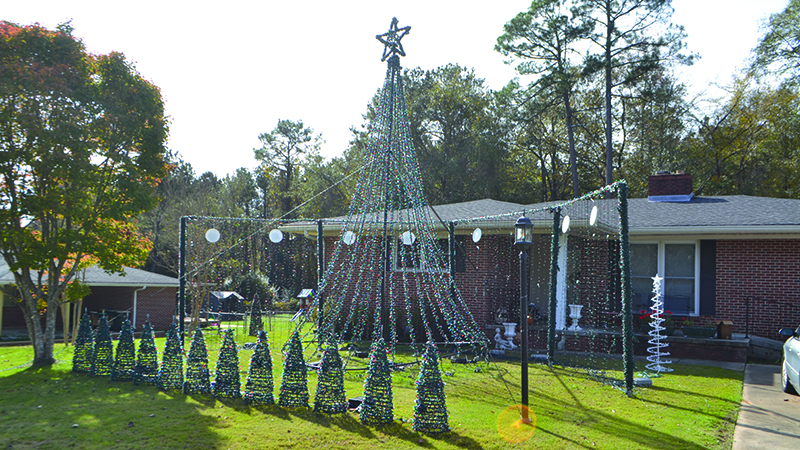 For a third straight year, this unique and most impressive show will be taking place in the yard of McCain’s parents, Tim and Cherie McCain, on 26th Avenue. Heading south on Highway 29, it’s the first street past the Madonna and the second house on the left. When the light show is going, it’s very easy to see. There are over 57,000 colorful lights on display, some are the conventional incandescent lights but most of them are brightly colored LED lights.

“It’s 95 percent complete right now,” McCain said. “We will turn it on for the first time this year at 6 p.m. on Tuesday, Dec. 1st. We will have a lot more LED lights this year. The reds, blues, greens and whites will be much more defined with the LED lights, We will have 16 songs this year. We will be coordinating the lights with the mood of the song. If it’s a wintry kind of song, the whites and blues will be more predominant. If it’s a fast-paced, traditional Christmas song, the reds and greens will be the dominant colors.”

McCain was hesitant about doing the show this year.

“I didn’t know how it would go over with Covid out there,” he said, “but so many people were asking me if we were going to do it and that they’d like to see it again we thought we’d go ahead and do it for a third year in a row.”

McCain said that he hates to be bored and doesn’t want to bore people with his light show.

“The shows are never the same,” he said. “There’s some unique animation. The poles and the trees seem to dance.”

Some Christmas yard displays are spread out and static. McCain wants his show to look at what one would see on the stage at the theater.

In fact, it was the theater stage that awakened an interest in lighting and music for McCain. Following his graduation from Valley High in 2013 he attended the Wadley campus of Southern Union State Community College for two years before transferring to Auburn University. He became involved in the technical side of theater, dance and music. He likes to think that his light show is like being in a theater with an audience being entertained by movement and music. “There are lots of moving parts,” he said. “You lose the density of light when you spread it out.”

Most of the music that’s playing at the show are traditional Christmas tunes, but there are some new things too. “One of the new songs is ‘Dancing Queen,’” McCain said. “We think that will add to the uniqueness to the show.”

Another non-traditional song is “Bad Boys.” “We are doing that in tribute to the Valley Police Department and the good work they do in protecting the public. We will also play ‘Let It Go.’ Kids will know it and like its Frozen theme.”

McCain said it’s okay for people to take photos of their family members standing in front of the display.

“We want people to feel comfortable and to enjoy the show,” he said. “I’ve been careful not to have wires in the front yard people could trip over. I’m trying to spread the word about it. I want people to come by and enjoy it. One show lasts about 30 minutes, but no two are alike.”

The light shows will be taking place from 6 to 10 p.m. EST on Sundays through Thursdays and from 6-11 on Fridays and Saturdays through Dec 27.