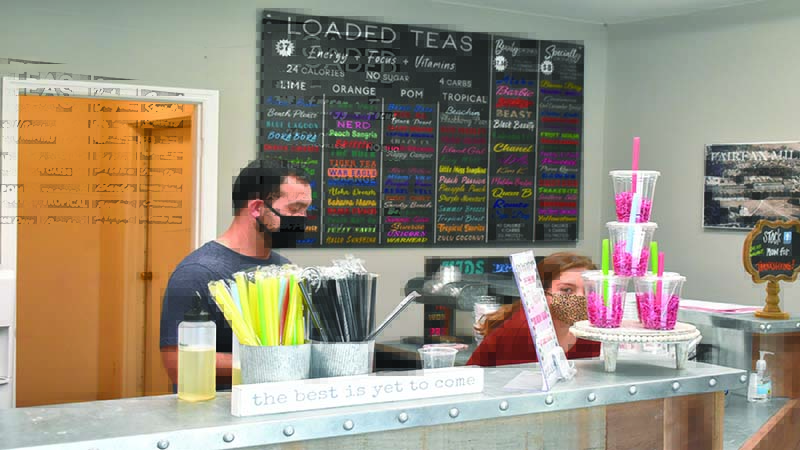 Almost on a daily basis, Megan Boyle and Brandon Carter found themselves driving to Opelika or Auburn to visit a nutritional club. When they would travel with their kids for travel ball tournaments or when they would go on vacations, the pair would find a nutritional store every day so they could get their daily drink.

“We were sitting on the beach one day and we were just like why don’t we bring this product to Valley,” Boyle said. “So many people from this area that we know are driving north, south, east or west to get it. Why don’t we bring that here to help them as well as introduce it to a lot of people in the area.”

“We were spending however much money on drinks, why don’t we invest this money and be able to bring it to the area, so they’re not having to travel outside of Chambers County and keep that money local,” Carter added.

When planning to bring a nutritional store to Valley, Carter and Boyle looked at the history of not only Valley but the Greater Valley Area. Carter has lived in Chambers County for the last seven years, while Boyle has been in the area for roughly 25 years.

With their experiences and research, they decided to incorporate the county’s mill identity to their store, settling on the name Milltown Nutrition.

“Back in the day, that’s where most people worked,” Carter said. “You could talk to most people around the area, worked for so-and-so mill. We wanted to bring that back and have that as the focus on Milltown Nutrition.”

On Nov. 6, Milltown Nutrition opened its doors for the first time.

In the short time that Milltown Nutrition has been open, Boyles and Carter’s favorite part of working in and owning the store has been meeting new people and creating a bond with their customers.

“We’ve got a lot of customers that we consider as our daily customers,” Boyles said. “They’re coming in and starting their mornings off and being able to have conversations with them and help them get their day going with a product and conversation… The most exciting part is the interactions and seeing people choose healthier options for me.”

Carter also runs All Star Graphix in Lanett. While he has a lot of local and returning customers, he likes Milltown Nutrition because he can have more daily interactions with customers, while making it a family business.

Shortly after opening, both Chambers Academy and Lanett were in the playoffs. Wanting to support the two schools, Milltown Nutrition introduced Rebel Tuff and Panther Pride. The proceeds from those drinks were sent to the schools to support them on their playoff runs.

“We’re big on supporting all of our local schools because I know what it meant when we were in school to be supported,” Boyles said.

The first Rebel Tuffs were sold on Nov. 13, and roughly 40 were sold to benefit the football team before Edgewood. They were sold again, along with the Panther Pride, on Nov. 20, which turned out to be the final week of high school football of 2020 in Chambers County.

Milltown Nutrition has a variety of options, as there are 12 different categories of drinks. Boyles said that the store shares a lot of recipes with other nutritional stores, so they could potentially make more than 300 types of drinks.

“It’s kind of a combination of things that we’ve created or that we’ve shared with our sister clubs,” Boyles said.

The two toughest drinks so far to make have been the Rebel Tuff and the Panther Pride, as the drinks had to taste good and look good while using the school’s primary colors.

Carter’s favorite drink on the menu is Pineapple Punch, while Boyles has been drinking more of the specialty lines, which can serve as a meal replacement. The Yellowstone is probably the best seller, as Boyles estimated that one out of every four drinks is a Yellowstone.

Milltown Nutrition is located next to Hood’s Pharmacy on Highway 29 in Valley.