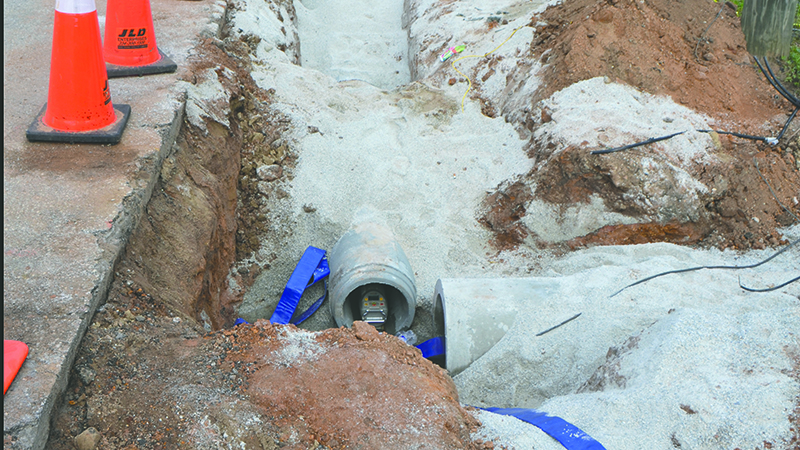 LANETT – There’s lots of concrete pipe spread alongside a portion of North Lanier Avenue right now. It’s part of the ongoing downtown streetscape project, but it’s designed to address a flash flooding problem that goes back many years.

“A total of 300 feet of pipe will be going underground along with ten new inlets,” Mayor Kyle McCoy told The Valley Times-News. “We’d previously put in lots of piping on the opposite site of the street. That plus the new piping that’s going in is designed to alleviate flooding along this portion of the street.”

The mayor said he was pleased to see this section of North Lanier faring better in periods of heavy rain than it previously did. He’s confident that the new piping will make things even better.

JLD of Opelika is the project contractor, and they are on a 60-day schedule and should be finished by the end of the year.

Part of the road is dug up and marked by orange cones, marking where the new sidewalk will be going in. It will look the same as what’s there now on the west side of the street, meaning it’ll be about five feet wide with curbing, planter areas for flowers, shrubs and small trees and decorative lighting.

The street will be approximately 12 feet wide.

“It won’t be as wide as it was, but there will be plenty of room. Paving the street will be one of the final phases of the project,” McCoy said.

“A long-time friend who now lives in the Birmingham area visited me over the weekend, and they were most impressed with what they’d seen,” McCoy said. “Those of us who see it every day get used to it, but it’s something very new to those who haven’t been here in a while. It made me feel good to have someone tell me that Lanett was looking so much better than it used to.”

While the North Lanier portion of the streetscape is in its final stages, the First Street portion of the “T” will be getting underway this month. Work will be completed on both sides of the street. The work will run from Gwen’s Tax Service to North 6th Avenue on the north side of the street and near the First Christian Church on the south side.

The city received some good news recently on a grant request. A matching grant of more than $500,000 has been approved to finish the work along First Street from Highway 29 to Eighth Avenue near Veterans Park and W.O. Lance Elementary School.

The mayor said the Electrical Department would soon be replacing a utility pole near the First Baptist Church. He said some complicated work would be involved but that there was a clear need to replace the pole.