Providing the gift of a Thanksgiving meal 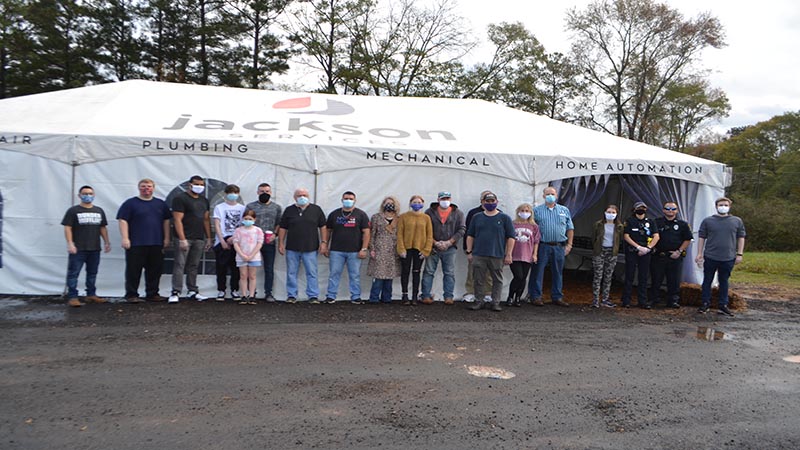 Free Thanksgiving dinners were available in West Point, Lanett and Valley on Thursday.

In West Point, a community-wide effort on the part of Mayor Steve Tramell and family, downtown restaurants and host of volunteers from Point Refuge Church made if possible for a total of 250 plates to be given out by 1 p.m. A drive-up lane in front of a Jackson Heating & Air tent that was on loan for the occasion made the distribution go very smoothly.

Officers from the West Point Police Department directed vehicles to the pick-up point and back on MLK Drive.

“We are having people coming from all over, not just from West Point,” said Mayor Tramell. “We’ve had them coming from LaGrange, Lanett and Valley. Everyone’s welcome. We are glad we can serve the community like this. We want to thank Point Refuge Church.

Pastor Matthew Thrower brought at least 20 people to help us. We also want to thank Jackson Heating & Air from LaGrange. They provided the all-weather tent that is so useful in serving these meals. We thank the Chattahoochee Fuller Center Project (CFCP) for donating the utensils. They do that every year, and we appreciate it.”

Rev. Brad Reed and the members of Plant City Baptist Church prepared 123 plates Thursday morning. Approximately half of them were picked up at the church and half of them delivered.

According to Rev. Carl Benedict of Fairview Baptist Church, the women from the church worked the better part of four days to get ready for the Thursday morning food distribution.

They first got the food from Givorns on Monday and then spent Tuesday and Wednesday cooking it. Early Thursday morning, an army of Fairview volunteers went about readying 130 plates for the steady line of people who came by.

Each plate had turkey and dressing, green beans, yams, rolls, cake and a bottle of cold water. Every plate had been given out before the noon hour.