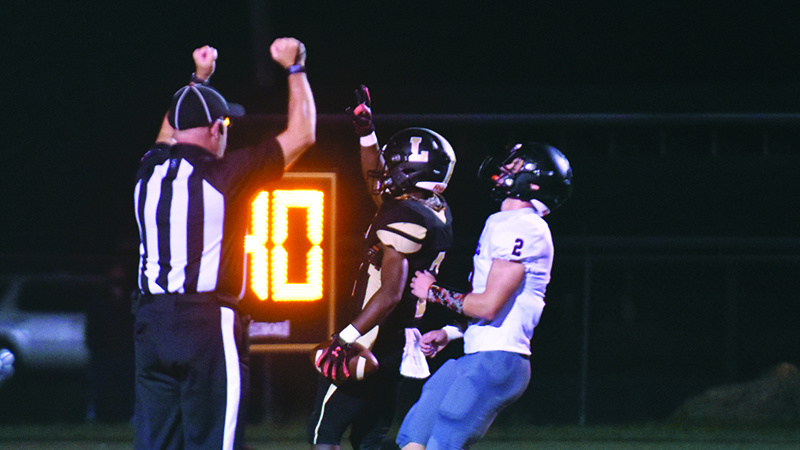 It’s been five weeks since the Lanett Panthers trailed in a football game, but heading into the second quarter, they found themselves down a field goal to G.W. Long.

That changed just 16 seconds in the second quarter, as the Panthers rattled off 25 consecutive points in less than 11 minutes on their way to a 37-3 win in the second round of the AHSAA 2A playoffs.

“They just had to pick up the energy. I told them I didn’t feel the same energy and passion that they had last week, so I knew they were going to be a little bit flat,” head coach Clifford Story said. “I told them all along that these guys had a good football team, but we were able to get it steamrolling a little bit in the second quarter. We were able to make some big plays and that was key. Once we scored the touchdown, it seemed like our energy picked up, and we were able to start executing a little more.”

The first score went to senior Tae-Tae Hurston. On third down, quarterback Kadarius Zackary looked to his left but threw deep to his right, where Hurston was a couple of steps in front of his defender. Hurston caught the pass and strolled into the end zone.

Hurston added his second touchdown later in the quarter on a punt return.

A great punt by G.W. Long pushed Hurston back to his own nine-yard line, but he fielded the ball cleanly and had a good amount of separation. He sprinted about five yards before he made his first cut to the middle of the field. A couple of steps later, the senior cut back toward the sideline and juked out a Rebel to give himself some space. He went the rest of the way untouched, finishing with a 91-yard score.

“All week long, Tae-Tae had a good week of practice. I told him I need the Tae-Tae from last year,” Story said. “He hurt his foot [in week three] and now it seems like he’s getting back to 100 percent. He was able to make some big catches in the middle of the field.”

Hurston scored for the third time in the fourth quarter, as Zackary stepped up in the pocket and found him on a post route wide open once again for a 47-yard touchdown.

The senior finished with more than 200 total yards, as he had 104 yards receiving and more than 100 yards on punt returns.

Alongside Hurston’s stellar game, junior running back D’Quez Madden stepped up in a big way.

In the first quarter, Madden was running toward the sideline more, as he was trying to get to the corner but finding little success. After talking with running back coach Franco Williams, Madden started to put his foot in the ground and cutting up the middle, and the junior started to break tackles and rip off big chunks of yards.

“He was really big. For some reason, he was just running sideways,” Story said. “After coach Williams got onto him and told him that he needed to get the ball downfield, that is what he was able to do. He’s a strong kid, he’s very fast, and he can break tackles, but break tackles going north and south not east and west.”

Madden’s fourth-quarter touchdown was one of the junior’s best runs of the season. He took a handoff and went to his left. He threw a stiff arm and shook off another defender before outrunning every Rebel on the field for the score.

Junior receiver Kel Patrick also finished with a sixth touchdown on the night. On a read-option, Zackary pulled the ball away from Madden and hit Patrick on a slant. Patrick got down to the two-yard line before jumping back to avoid a tackler, much like Alabama running back Trent Richardson did in 2011 against Ole Miss, and stretched the ball across the goal line for a 21-yard score.

Lanett will travel to Leroy for a top-3 matchup next Friday night in the state quarterfinal game.