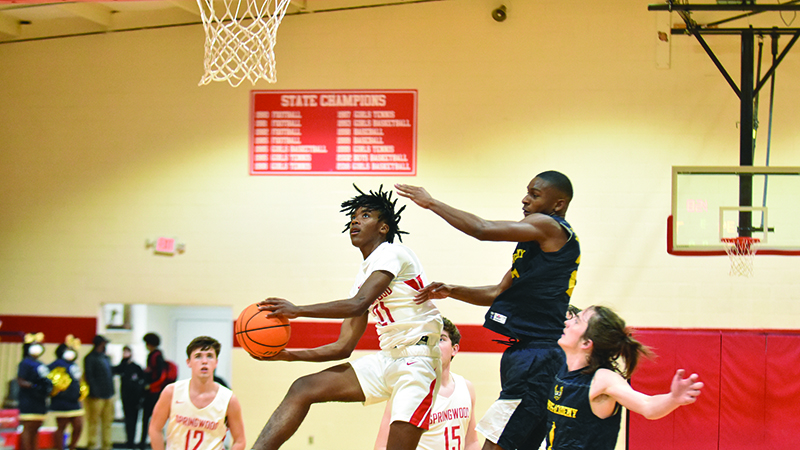 On Thursday, the Springwood Wildcats boys basketball team showed how tough they could make an inbounds play go for their opponent, as they were able to constantly pick off passes from Lafayette Christian.

They once again showcased that ability on Tuesday, dominating Campus Academy 89-49.

Early in the first quarter, Springwood was scoring most of its points by shooting jump shots along the left corner, as it was able to hit a pair of threes and a couple of mid-range jumpers. About four minutes into the game, the Wildcats had already built a 12-point lead and were slowly expanding the lead. Whenever Campus Academy broke the press, a Springwood defender was usually athletic enough to tip away the dribble and take it down the court for an uncontested layup. At the end of the opening quarter, Springwood led by 20.

In the second, Springwood started to really get going, as its length caused multiple problems for the opposing Ravens.

“That’s what we’re talking about. Don’t be worried about the scoring part of it, start with your defense,” head coach Lisa Sampson said. “It started with good pressure on the press and then understanding and playing the rules on defense. I’m proud of our guys.”

The Wildcats scored 32 points in the second quarter, expanding the lead from 20 to 41 at halftime.

Coming out of the halftime break, Springwood led 57-16. Even though there was little hope left for them, the Ravens continued to fight. The lead at the end of the third quarter was down to 30, as Springwood’s press seemed to lack the same intensity as it did in the first half.

“We need to figure out how not to let down when the score is that lopsided, but we’ll get it,” Sampson said.

The clock ran the entirety of the fourth quarter, but the Wildcats held the Ravens to just two points, scored by a pair of free throws.

Sampson was able to empty her bench for most of the second half.

“I think it’s important for these first two games to get everybody minutes, so they understand what it’s like to be in a game and what the speed of the game is like,” Sampson said. “I think that’s been the most important part for us. We’re getting there.”

“The chemistry is really good,” Sampson said of her team, especially the starting five. “When you’re talking about three new kids in the program, they act like they’ve been going to elementary school with some of these kids. That’s a great thing for us to continue to build on.”

One area that Springwood struggled with last season was consistently hitting three-point attempts. On Tuesday, the Wildcats showed their range behind the arc, hitting nine three-point shots.

“It all comes down to work and shooting game speed shots at practice,” Sampson said. “These guys have really committed to doing that, and they worked over the summer. The kids that work over the summer, you can tell during school ball.”

Springwood will be back in action on Thursday when it travels to Macon-East.