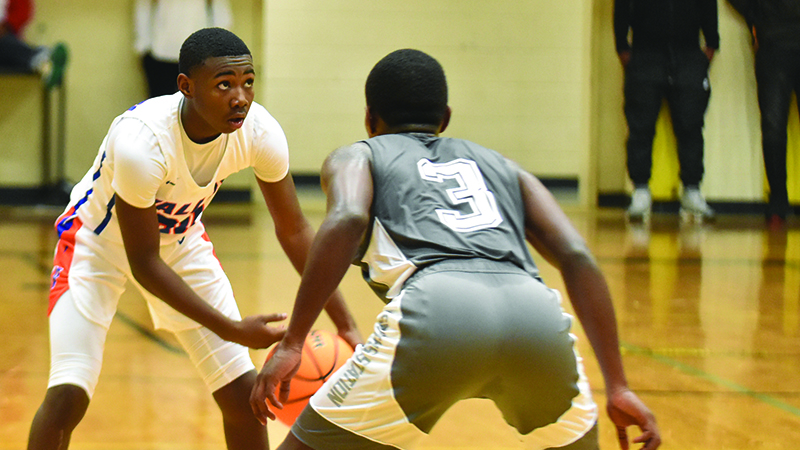 Early in its game on Tuesday, the Valley boys basketball team was in a fight against 7A Smiths Station in the winners game of the LaFayette Tip-Off Tournament. The bigger and more experienced Smiths Station won the fight, pulling away in the fourth quarter and winning 69-54.

“I think the youth came out in us,” head coach Marshon Harper said. “Quez [Trammell] got in foul trouble. We played hard. We don’t have anything to hang our heads about. We played until the end. They’re the bigger team. We just have a bunch of younger kids on the team. It’s good experience for them.”

The Rams were riding off an explosive Monday night where they put up 62 points against LaFayette and were looking to start the season 3-0. Their offensive firepower was on display in the opening quarter, as they outscored a much taller Smiths Station team 24-16. The Rams controlled the inside and let a couple of 3-point attempts fly in the opening quarter.

To start the second quarter, Smiths Station went on a 9-0 run that spanned for about four minutes, taking the lead. During the run, Valley struggled to hold onto the ball, as most of its possessions ended in turnovers. By the end of the quarter, the Rams’ eight-point lead had turned into a three-point deficit.

Coming out of the half, both teams were fighting for the win, as the lead changed hands several times in the first four minutes. Most of the points in the opening few minutes were scored around the rim with dunks or free throws.  With 3:20 left in the quarter, Valley held a slim two-point lead, but that was the final time the Rams held the lead. Smiths Station finished the quarter with a 12-4 run that basically sealed the game.

In the fourth, the Rams tried to find an answer, but the Panthers were on a roll and had claimed all the momentum.

Harper’s biggest takeaway from the game was the play of the freshmen and sophomores on the roster. Freshman Brandon Thomas got his first varsity start and played a big role throughout the duration of the game.

“We had some young kids step up, Harper said. “We started [freshman Brandon Thomas]. He had some good rebounds and put backs. Other guards, they’re young players and they gave us something. It’s a positive that we’ll build on. We’re 2-1, so I’m happy”

The Rams are now 2-1 on the season, playing three games in five days. Harper believes playing in an early-season tournament was a good way to get his players some much-needed experience.

“It’s huge,” Harper said. “We’ve been practicing for about a month, so the guys just wanted to play some different competition. Getting a chance to compete in front of the fans was huge.”

Valley will play Bullock County on Dec. 1 for its first home game of the season.