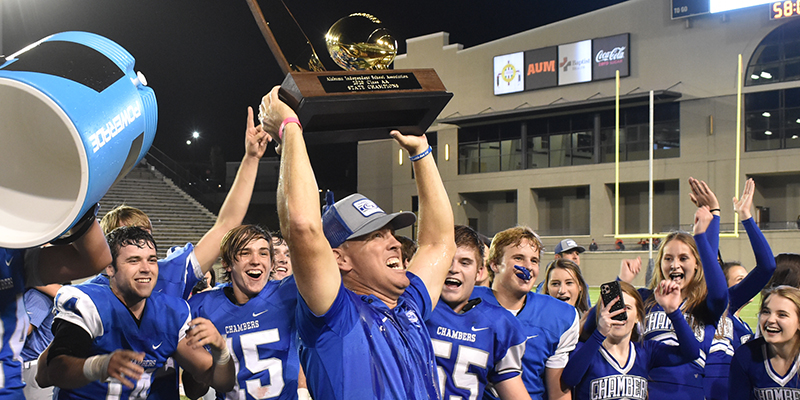 In the last five years, the Chambers Academy Rebels have been an annual participant in an AISA Championship. Four of those years were as a Class A team, but in 2020, the team made a jump to Class 2A, but the Rebels kept rolling.

One of the biggest constants of Chambers Academy’s success has been head coach Jason Allen, who was named the Greater-Valley Area Coach of the Year.

Allen led Chambers Academy to a 12-1 season that was capped off with a state championship, the school’s second in three years.

“It means more than you can put into words to have the season that we had,” Allen said. “Our program has ascended to this level, it hasn’t been a flash in the pan. We’ve been building this year after year. To jump up in a higher classification and be able to accomplish what we did is kind of overwhelming.”

This season was the first time 2007 that Chambers was in Class 2A. That year it finished with three wins. Three of the teams in its region advanced to the semifinal round of the playoffs. Along with facing an extremely tough region, the Rebels faced four teams that were ranked in the playoffs. Of the six teams that played in Montgomery for a state championship, the Rebels defeated four of them.

“I think it made our team,” Allen said. “We were forged under fire, and we had great competition all year. We really just had a lot of fun. It’s fun to play in games that you have to play your best and have a great gameplan. When you do something like that, it makes you feel a greater sense of accomplishment. Looking back on our whole body of work on the year, I think our guys really rose to the occasion in every football game except the one we lost. The one we lost humbled us and grounded us. We let it affect us positively, and we played with our hair on fire after that game.”

Before playing the state championship game, Allen’s son, Payton, said that Jason watched more than 40 hours of film to prepare for an Escambia team that dominated almost every team it had played this year, with the exception of Glenwood, who was the eventual 3A state champion.

“It’s a personal connection,” Allen said. “Like the SEC has its slogan ‘It just means more.’ I’ve worked at other places, but when you’re home, where you went to school, where you live, where you grew up, where you know all the people, it just means more. You work harder than you would anywhere else because you’re not thinking about working for money. You’re working to accomplish something. We spent a lot of time behind the scenes watching film. There’s so much that went into this and be able to do this at your alma mater, it just means more.”