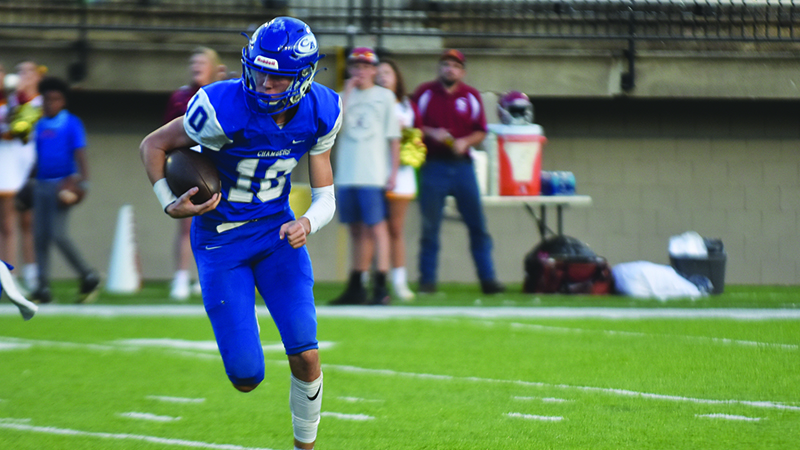 The best senior football players in the Alabama Independent School Association had one more chance to play on a Friday night, as the AISA All-Star game took place on Friday.

“It was fun. I met a lot of cool people down there,” Chambers Academy quarterback Payton Allen said. “We didn’t get to do the whole experience because of COVID, but we got to spend a lot of time with the other guys and that was really fun. It was just a fun experience overall.”

The East team mixed in three different quarterbacks throughout the game.

Allen, who finished with more than 400 yards in his final Chambers Academy high school game, was named the MVP of the game. He finished with 40 yards rushing and 91 yards passing and three touchdowns.

“I hadn’t thrown a ball in three weeks. It could have gone to anyone,” Allen said. “I just went out and played and had a good time. It was great winning MVP, but the memories with my teammates and dad and some of the other guys… It was just fun overall playing in that game.”

While Allen capped off his Chambers Academy football career with the MVP, for him, nothing beats winning a state championship.

Allen was joined by five of his teammates that had the opportunity to finish their football careers at the same field where they won a state championship a couple of weeks earlier. Cade Tarver and Dean Sheffield played on defense, while Luke Keel, Allen and Jacob Oliver all played on offense.

“That was great,” Allen said. “We just had a good time and spending some time [together] before our last game. I’m grateful to have the senior class, and the players that I’ve been playing with.”

Jason Allen was selected as the East’s coach, meaning the father-son tandem had one more opportunity to be together on the football field.

“It wasn’t really the same as a football game for us, but it was really relaxed. It was great getting one more game with my dad,” Allen said.

Springwood’s O.J. Tolbert was also selected to play in the game.

One of Allen’s favorite parts about playing in the game was getting a chance to meet and form a relationship with the other seniors that he had faced so many times throughout his career.

“A lot of them you play against them and you know who they are but you really don’t know them,” Allen said. “Everybody down there was really cool and fun to meet. We all got along and had a good time.”

Allen finishes his senior season with one of the best seasons in the state of Alabama. He was responsible for more than 4,000 yards and 43 touchdowns. He ran for almost 1,200 yards while throwing for 3,209 yards.

“It all started before anyone was working, right after baseball,” Allen said. “We just were out there working on routes, then during the summer workouts. Although I loved all the other teams, this was probably my favorite team that I’ve played on. We were all brothers, and we all just worked hard and got better as the season went on. It was a great year.”

Allen finished second in the state in passing yards, finishing just 18 yards behind Thompson’s Conner Harrell. He also finished sixth in the state with 31 passing touchdowns.

“I didn’t know anything about that a week ago, that I was even close to that, so that was pretty cool. People [that play] in private school just don’t really [get as much attention],” Allen said.