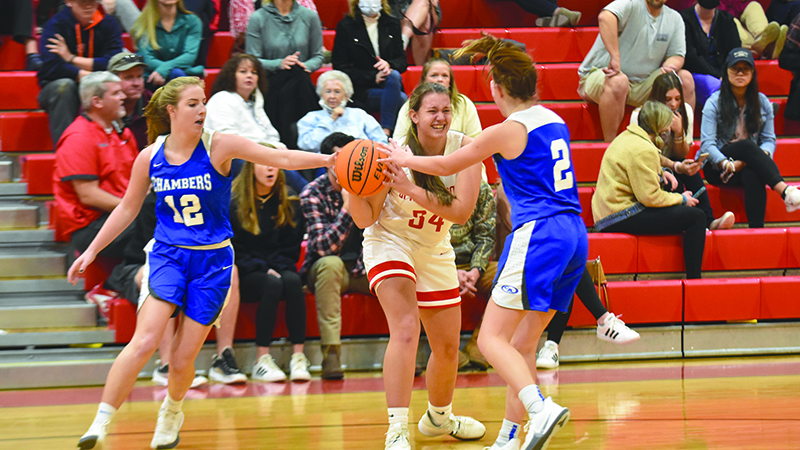 After getting swept by their rival a year ago, the Chambers Academy girls basketball team took down Springwood 42-29 in a defensive battle.

“We just struggled for 32 minutes offensively today. That’s my fault. I need to do a better job of putting us in the right place to make shots”, Chambers Academy head coach Jeff Hines said. “I’m so proud of our girls. I just told them in the locker room every team that I’ve ever coached would have lost because normally my teams when they don’t play well offensively, they don’t play well defensively. It doesn’t matter what we’re doing offensively, they’re going to get after your tail defensively. I’m so proud of them.”

Both teams struggled offensively to start the game. In the first four minutes of the game, there were six points scored between the teams, including only one made shot from the floor. Chambers took the lead with two minutes left in the first quarter as Bailey Allen hit the first Rebel field goal of the game.

For Springwood, Ashlea Fuller scored all three of the team’s points in the quarter. For the second straight game, Springwood has struggled to score in the first quarter of a loss, as it scored just two points in Saturday’s loss to Abbeville.

“We’ve got to find ways to score, and that’s still a work in progress,” Springwood head coach Lisa Sampson said. “I thought we had some good things drawn up, but we’re just not executing. We’re better shooters than what we showed today. We just have to stop panicking.”

Both teams woke up a little bit, as they combined for 19 points in the eight-minute second quarter. Chambers expanded on its lead in the quarter, as it got three shots to fall alongside four free throws.

Both teams forced a lot of turnovers in the first half, which stunted any momentum either team got after a score. Hines credits the Rebels’ press for their control of the first half.

“I think our press continued to fatigue them, even though we didn’t get a whole lot out of it,” Hines said. “When you’re going up against pressure for 32 minutes, it makes it tough. I think our girls wore them down.”

Heading into the fourth quarter, Springwood trailed by just five points. The Wildcats had gotten some shots to fall regularly and were getting to the free-throw line, where they were making shots. In the fourth quarter, the Wildcats fell off, scoring just five points in the quarter and making only two of their four attempts from the free-throw line.

On the other hand, the Rebels put the game away, hitting seven of their 11 free throws down the stretch.

Chambers is now 5-2 on the season, as the Rebels have won their last five games.

“I like to break down our season into three separate seasons: before Christmas, after Christmas and the playoffs. It’s a really good feeling heading into the Christmas break on a five-game winning streak after dropping the first two,” Hines said. “We have to go back to work after Christmas and work on some things to get ready for region play.”