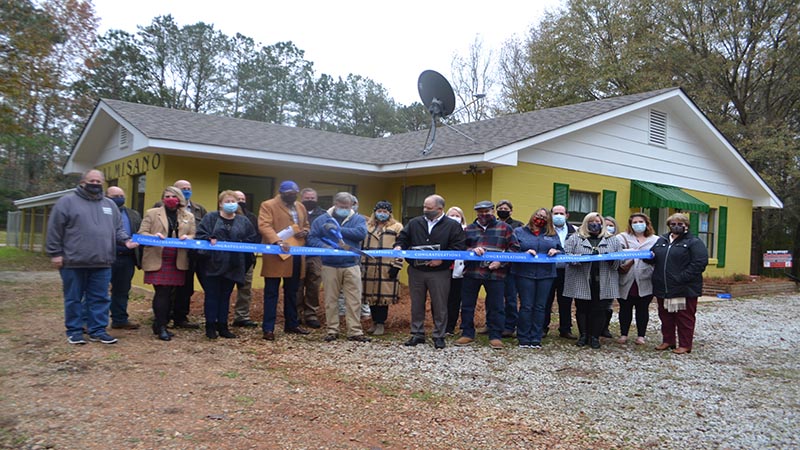 Significant upgrades have taken place at the Chattahoochee Humane Society animal shelter located off Fairfax Bypass. On Thursday afternoon, the Greater Valley Area Chamber of Commerce hosted a ribbon-cutting at the shelter to celebrate what’s been done. Present were CHS board members, some past presidents, the animal shelter staff, and representatives of the shelter’s four major sponsors — the Chambers County Commission and the cities of Valley, Lanett and LaFayette.

The $60,000 project includes a new cat room, covered kennels on both sides of the building, a new roof and new painting on both the outside and interior of the building.

The new cat room honors the Palmisano family, who at one time lived for many years in West Point and the Valley area. A descendant of those residents bequeathed the money needed to bring about those improvements. The late John Knowles Palmisano, who had lived in the Atlanta area, remembered his family ties to the local area and wanted to do something for the public good.

The construction work was done by Batson-Cook and the painting by Emmett Blackshear. Six local high school seniors who are serving as junior ambassadors cleaned up the grounds for Thursday’s ribbon cutting.

“They put us guys to shame,” Board Vice President John Radford joked.

State Rep. Debbie Wood told the gathering that she was glad to see this come about.

“It’s exciting when the community comes together to do something like this,” she said. “We will always remember that we had this ribbon cutting on a cold day. Thank you, board members, staff and volunteers for the dedication you have to this animal shelter.”

Commissioner Debra Riley said that she had made quite a few trips on behalf of the county to see progress being made at the shelter.

“There has been some criticism of what’s been going on here,” she said. “I think it’s unfounded. The present board, staff and volunteers have been doing great work.”

Council Member Jim Clark thanked everyone on behalf of the City of Valley.

“This has been a long time coming,” Radford said.

Radford said he liked that windows had been installed in the new cat room, enabling people on the outside to see the cats.

The cat room is a major improvement for the cats being housed at the shelter. It gives the spayed or neutered cats at the shelter plenty of room to roam around, play with one another, climb on some cat towers or curl up inside cat beds. The cats had previously been kept in small cages. Dave Shirley of Dave Shirley Photography, Lanett, has donated three cat towers and 10 cat beds to the new room.

“It helps a lot with a cat’s temperament to have more room to move around,” said Shelter Manager Shon Sims. “It’s much better than being confined to a small cage.”

The recent work has also benefited the shelter’s dogs. The runout areas in front of all 16 kennels are now covered, offering much protection from inclement weather.

“We have a new roof and new painting, too,” Radford said. “It took us only four months to do it. We are now looking at utilizing the back room as some kind of puppy house. I know that people want the best treatment for animals. I just want the public to believe in us and that we are trying our best to do that.”

In recent years, Shelter Director Shon Sims and staff members Jennifer Chavez, Aimee Clark and Lisa Cofield have managed to greatly reduce the number of euthanizations of at the shelter. It’s declined from an estimated 85 percent of the animals taken in to around 10 percent.

Largely due to aggressive spaying and neutering programs, other parts of the U.S. don’t have large numbers of dogs and cats taken to local shelters. In a growing number of cases, they are looking to the south for adoptable pets. Animal rescues are key in enabling this to take place.

“We work with adoption agencies all over the U.S.,” Sims said. “The 10 percent rate is better, but it’s still unacceptable. Our goal is to keep working until it’s down to zero. We want to find homes for all our animals.”

Board President Dantz Frazer thanked everyone for coming out to the ribbon cutting and expressed his appreciation to the Chambers County Commission and the cities of Valley, Lanett and LaFayette for their support of the humane society.

The Palmisano connection to West Point goes back to the early 20th century when Italian immigrant Antonio “Tony” Palmisano ran a successful fruit stand on the southeast corner of West 3rd Avenue and West 8th Street.

The Bank of West Point built on that corner in 1907, and Palmisano moved his business to the present-day location of the West Point Post Office.

He later ran a restaurant and was known for feeding any baseball player for free.

He loved the game, and his son, Joe Palmisano, was a very good player, good enough to have been on a team that won the world title.

Joe Palmisano was a member of the Philadelphia A’s team that defeated the St. Louis Cardinals in the 1931 World Series.