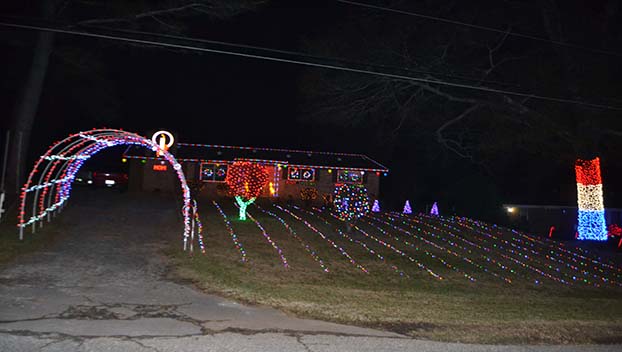 VALLEY — For anyone who likes to drive past impressive Christmas lights displays, Cleveland Road is a must visit this time of year. Heading north on Highway 29, Cleveland Road is the first right past Valley High School. A short distance down the street, there are five houses with hundreds of blinking lights, lighted yard displays, and multicolored lights wrapped around the houses. There are lighted arches over the driveway entrances and a tree that’s decorated like the red, white and blue of Old Glory.

Those who drive by to see it are asked to tune their FM radios to 107.9 to hear a continuous reel of Christmas favorites such as “Silent Night” and “Blue Christmas” that move along with the lights.

Doing this year after year is a cooperative effort on the part of neighbors, but two guys in particular work hard to create something special each December. Matthew Perry does most of the work on three of the houses and Randy Hill takes care of the other two. Matthew lives in the first house on the left with his mom, Gina Perry, and brother, David Perry. His grandmother, Betty Vickers lives next door, and his aunt, Patsy Skinner, is in the fifth house on the left. He decorates those two yards as well.

Randy Hill grew up in Valley and is today an engineer living in Texas. He takes time off work in late November/early December to come back home to Valley to decorate the yard of his dad, Tommy Hill, and his next-door neighbor, Danny Gooden.

“Danny and I went to school together,” Randy said. “I’ve known him for a long time. I really like setting up a display in his yard.”

Randy lost his mom, Mavis, earlier this year. There’s a big sign in the center of the five-yard display remembering her, along with other loved ones who have passed on in the 15 years the five-house display has been taking place. Others remembered in the red, green and white “Merry Christmas: Peace, Love and Family” sign include Amy Gregory, Kent Vickers, Jerral Skinner and Travis Potts.

“This all started around 15 years ago,” said Gina Perry. “My parents (Betty and the late Kent Vickers) started a really nice display. Matt was really young at the time but really loved it. He’s kept it going both at our house, my mom’s house next door and at my sister’s house down the street. Randy does a great job at his dad’s house and the Gooden house next door.”

Doing his part in the five-house display is something Matt looks forward to every year.

“If you ask him what he wants for Christmas, it’s probably something to go in the yard display,” Gina said. “He starts putting it up in early November. It takes him several days to get all three yards done. We turn it on the Friday after Thanksgiving.”

“We add something new every year,” Gina said. “This year we have added some blow ups, including Rudolph the Red-Nosed Reindeer, a deer and some bears. We also added some wrap around lights to the house.”

In addition to the three houses on Cleveland, Matt also does the yard decorations at the home of his aunt on Veterans Memorial Parkway in Huguley.

“He loves to do this, and he’s really good at it,” said his mom. “I keep telling him he ought to have a business specializing in it.”

Matt is already looking at doing something new next year.

“We’ve gotten an RBG box and are looking at getting the lights that go with it,” he said. “These lights can change to any color.”

Gina, her two sons, her mom and sister have long been accustomed to many cars coming by their homes during the night-time hours this time of year.

“We have gone outside to greet them, thank them for coming by and given them some candy canes,” Gina said. “What means so much to us is how much the children love what they see. Seeing kids who are happy at Christmas makes it all worthwhile.”

Randy Hill has lived in the Houston area since 1987, and he comes home every year to decorate his dad’s front yard. It’s a sophisticated operation with a total of 18 controllers and more than 280 channels. This keeps the multiple displays from overloading. Several years back, his parents were living in a house at the end of Cleveland Road, and he had some big blow up characters at the edge of the road. One of the displays people really loved showed Santa peeking behind the door of an outhouse.

Putting up the display involves some hard work, long hours and making sure everything has been done right.

“Almost every year I tell myself this is the last time I’m going to do it,” Hill said, “and then someone will see me putting it up, stop their car and tell me how much they enjoy seeing it every year. They tell me their kids grew up coming to see it. That’s the sort of thing that keeps you going.”

Matt and David are big fans of what Ruslan McCain does in his yard display a couple of blocks away on 26th Avenue. They have even exchanged ideas on how to have a first-rate display.

The five houses on Cleveland Road and the McCain home on 26th Avenue are all places many go to see during Christmas lights tours of the area.