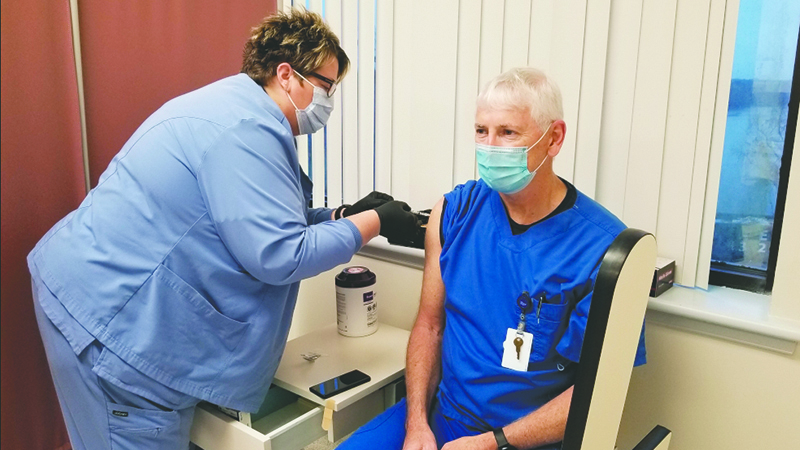 “The Pfizer vaccine has been made available locally to our front-line workers, our first responders and nursing home employees,” EAMC-Lanier Administrator Greg Nichols told The Valley Times-News on Tuesday. “It’s available on a tiered system based on Pfizer’s production. The Moderna vaccine is being shipped this week and next week.”

Nichols said it will likely be this spring before a vaccine is widely available to the general public.

“Based on the information we have, vaccines should be widely available this spring,” Nichols said.

That being the case, it is more important than ever for people to guard against the spread of this deadly virus, something that’s already killed over 315,000 Americans in less than nine months. It’s more than all the U.S. battlefield deaths in the four years of World War II. It’s also like having 9-11 at least 105 times.

The positivity rate for those who have been recently tested is now much higher in both Lee and Chambers County than it was during the initial surge of Covid-19 back in the spring. At that time, the rate for Chambers County was around 10 or 11 percent. It’s now 17.2 percent.

EAMC recorded 64 COVID-19 hospitalizations on Sunday at 9 a.m., the highest it has seen throughout the pandemic, acording to a press release from the hospital. EAMC does not specify whether patients are at EAMC in Opelika or at EAMC-Lanier in Valley.

“It’s more widespread right now than it has ever been before,” Nichols said. “That’s true for the local area and across the nation.”

The hospitalization rate has been going up at both EAMC and EAMC-Lanier but is still manageable.

“It’s down a little bit today but has been at near capacity,” Nichols said. “We want the public to know that we have backup plans. We have contingencies in place to take care of our community if the infection worsens. We could have more ICU space if it’s necessary. There are alternate sites available.”

Nichols is urging everyone in the local area to guard against the spread of the virus. “Gov. Ivey’s mask mandate has been extended through Jan. 22 and could be extended after that,” he said. “Mask wearing works. Just remember to wear one whenever you are away from home, to stay at least six feet away from others and to avoid large gatherings.”

Nichols is encouraging everyone to be vaccinated when it’s available for them.

“We want people to know that there have been no adverse effects from anyone who has gotten it,” he said.

Nichols visited China in the summer of 2019, several months before COVID-19 was first detected in the city of Wuhan. “Even then, lots of people were wearing masks,” he said. “That was especially true when you were around people in crowded areas such as subways. It was very clear to me that they were very careful around crowds. In the U.S., we are a freedom-loving country and that’s OK, but we’ve never had to deal with anything like COVID-19. I think people are getting more into doing what needs to be done, and that’s good.”

Something good that could be related to more mask wearing is that there’s not as much influenza going around that’s normally taking place this time of year. Mask wearing, frequent hand washing and sanitizing, social distancing and avoiding crowds could be holding down the normal spread.

“We have had very minimal cases of flu in our emergency room and in the hospital,” Nichols said.

“The COVID-19 precautions may very well be a factor in that.”