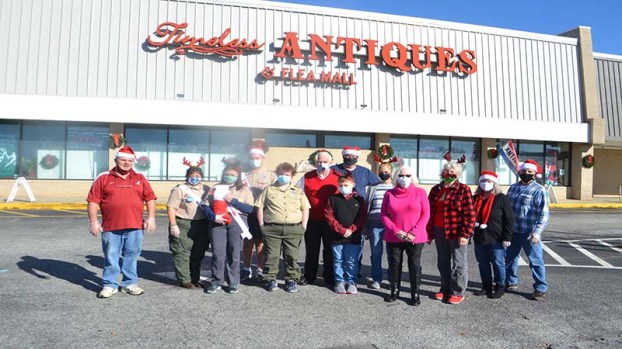 VALLEY — A total of 350 stockings were filled Monday afternoon by a crew of volunteers at Timeless Antiques, and Ray and Jackie Edwards’ annual Christmas stocking distribution was set to begin on Tuesday. It’s the 29th year this has been done in the spirit of making Christmas merry for seniors in Valley, Lanett and West Point.

An assembly line was set up in the back of the store with such items as apples, oranges, drinking cups, soft peppermint candy, candy canes and other candy, hand lotion, small gifts for men and women and a Christmas card signed by Mr. and Mrs. Edwards. Each person in the line placed three oranges, three apples, one cup and several pieces of candy in each stocking along with other gift items.

The assembly line is an effective way to fill that many stockings in one afternoon.

“It used to take me and my family much longer to get them all filled,” Edwards said. “We started doing it here at Timeless Antiques three years ago with a crew of volunteers, and it goes much faster.”

In 2017, Timeless Antiques owner Carol Fulcomer learned that Edwards had been diagnosed with cancer and offered to have a group to help him at the store. It was a way of keeping a Valley Christmas tradition going. Each year, local Scouts are among those helping out. This year, members of Troops 9003, West Point, and 31, LaGrange, were there to lend a helping hand. Both are members of the Wehadkee Chapter of the Order of the Arrow, which is dedicated to community service.

Participants in the Lanett senior program were scheduled to get their big, red and white stockings Tuesday morning, They were delivered to their homes along with the hot meal they get five days a week. At 2 p.m. Tuesday, the 50 residents of Sylvia Word Manor each received a stocking at their door.

At 9:30 a.m. on Wednesday, approximately 120 stockings are scheduled to be delivered via Valley Parks & Recreation buses to Valley seniors. Another 52 will be given to those Valley seniors to drive to the Senior Center to pick up their meals in the drive-through lane.

“We will also be making 40 to 50 deliveries to those we know in Todd Addition,” Edwards said. “I want to thank Rick Torrance of Torrance Construction for helping us with this every year. The price of fruit is high this year. We bought 1,200 applies, 1,200 oranges, several thousand candy canes and 300 pounds of soft peppermint to go into the stockings. I also want to thank Cathy Smith for the nice job she did in crocheting the items we put in the stockings for women.”

The women got such items as scarfs, jewelry items and scissors. The men got screwdriver sets, gloves and small flashlights.

This is a year-round project for the Edwards family.

“We’ll start buying for next Christmas next week when the prices will be lower,” Edwards said. “We enjoy doing this so much. I’m stable now with my cancer, and everything is going well. The Lord has blessed me. I’m hoping and praying we’ll be over this virus next year, and that we can have a good, safe year for our 30th Christmas stocking program.”