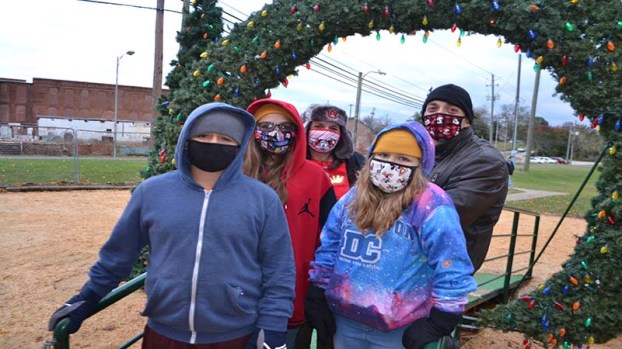 VALLEY — Monday was opening day for the Christmas Merry Go Round and for the ninth year in a row, the Herston kids were first in line. Sam, Zoe and Cari were there more than an hour before the 5 p.m. starting time. Accompanying them were their dad, Jonathan Herston, and grandmother, Ellen Meadows.

“It’s a family tradition they are determined to keep going,” said Jonathan Herston, who is the director of the Chambers County Circle of Care Center for Families.

Monday was the coldest day we have had in many months, but the Herstons took it all in stride. When Mark Hudmon of the Valley Parks and Recreation staff dropped the chain at 5 p.m., Sam, Zoe and Cari gleefully ran to the merry-go-round ponies, mounted them and the season’s first ride began.

Approximately 30 people took part in the season’s first ride. One of them, Titan Leishman, was in town all the way from Ogden, Utah. He rode a painted horse alongside his mom, Jetta Leishman, who’s originally from the Valley. Young Titan came well prepared for the cold weather. A Spiderman toboggan covered his face.

Traditional Christmas music plays during each ride. A misting system sprayed each unmounted horse between rides. Those who wanted to keep riding were allowed to do so without their horse being sprayed.

Some of the music, like Rudolph the Red-Nosed Reindeer for example, is the same as it was in 1956. It’s just played in a different way. In the early days it was on reel-to-reel tape. It transitioned into cassettes in the 1970s and to CDs in the 1990s. It’s now played via smartphone.

“We are asking for everyone coming to the merry go round to wear a mask,” Hudmon said. “We are asking them to socially distance, and we’d like to limit it to 30 people per ride.”

Signs are in place at the entrances to the merry to round. Each one reads: “Masks Required. If you enter the park without wearing a mask, you will be asked to leave. Thank you for helping Slow the Spread of Covid-19!”

The Herston kids have grown up with the merry go round, but their enthusiasm for riding it each Christmas season is still high.

“We want to keep riding it for the rest of our lives!” exclaims Zoe.

Zoe and Sam are students at W.F. Burns Middle School. Cari is a sophomore at Valley High.