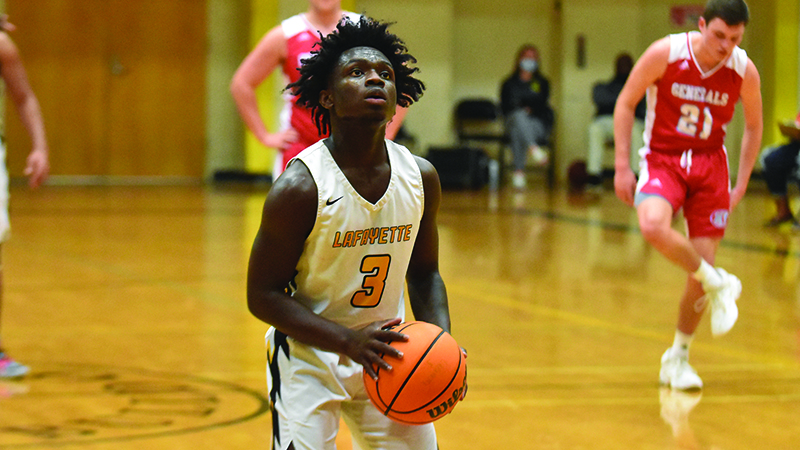 After struggling in its first two games of the season, the LaFayette boys basketball team was forced to wait a little while (nearly three weeks) for its next game, as teams had to cancel due to COVID-19 restrictions.

After waiting 20 days, LaFayette finally got a chance to play, and it picked up its first win of the season, defeating Horseshoe Bend 47-33.

“We needed it,” head coach Obadiah Threadgill said. “We know that wins are going to be earned not given. When you have a collection of talent, it seems to come a little bit easier. These guys are struggling and fighting for every opportunity. We aren’t as fast, we’re not as big, we don’t shoot as well, we don’t handle the ball as well, so we’re really learning and toling in every phase of the game.”

The game was close the entire first half, as both teams went on small runs to cut into and build leads.

In the first quarter, neither team built more than a three-point lead. LaFayette controlled the tempo of the quarter, moving the ball around the floor and probing the Generals’ 2-3 zone defense. This led to good looks around the rim for most of the quarter, which the Bulldogs made five. At the end of the first eight minutes, LaFayette led by a point.

In the second quarter, the Bulldogs started to play a press defense, which started to force some turnovers and allowed them to adjust the tempo whenever they could. The Bulldogs outscored the Generals 18-10 in the quarter, as senior point guard Ty Daniel hit a trio of three-point shots, which gave the Bulldogs a lead they would never give up.

The hot shooting from beyond the arc continued in the third quarter, as Curtavious Silmon hit a pair of threes.

“Basketball is just rhythmic and we got into a rhythm,” Threadgill said. “We were able to speed them up a little bit. That’s not really how we want to play but that’s how we know how to play. We want to work on things that can translate game-to-game… We may be able to do it in bits in pieces. Playing fast and sharing the ball, we got into a rhythm. We broke it open a little bit and it gave us a little bit of breathing room. We’re just looking to build on it.”

The Bulldogs controlled the game in the entire fourth quarter. They allowed just 11 points in the final half of the game. In the third, Horseshoe Bend scored just three points. At the end of the fourth quarter, LaFayette just worked the ball around the perimeter, killing the final three minutes on the clock.

Ty Daniel and his brother Jay Daniel finished with 12 points apiece to lead the Bulldogs. Silmon and junior Chandler Winston each finished with eight points.

LaFayette is home on Thursday, as it hosts Dadeville. The first of three games starts at 4:30 CT.