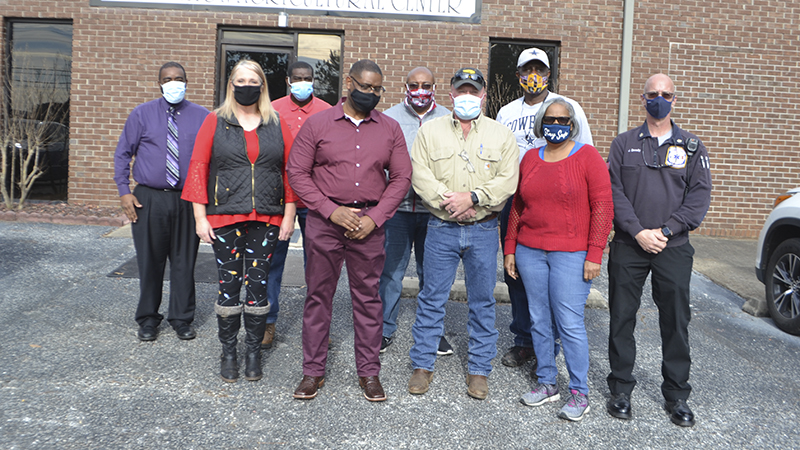 LaFAYETTE — During the noon hour on Wednesday, approximately 40 people attended a combination Christmas lunch and retirement ceremony held inside the ALFA building on the east side of LaFayette.

Randall “Randy” Norred is retiring after 17 years with the city’s electrical department. He’s served as the superintendent for the past nine years.

The Christmas dinner was smaller than normal due to COVID-19 restrictions. Even so, there was a good cross section of the city’s electrical, water, gas, police, fire, city hall and sanitation departments in attendance.

“I want to thank you all for being here,” said Mayor Kenneth Vines. “I want to thank a decorating committee on having done a great job in preparing the tables. It looks nice, and there’s room for social distancing.”

Mayor Vines said that 2020 had been a challenging year for everyone.

“There were lots of ups and downs,” he said. “Some families lost loved ones and others had family members to get sick but survive. Through it all, God has been good to us.”

With Norred’s retirement, Vines said the city would be losing a first-rate employee.

“He’s been a dedicated employee for 17 years,” he said. “He’s also a great family man. He’s a good husband, father and grandfather.”

Vines said he’d never forget the first time he met Norred. It was 17 years ago. Vines was with the LaFayette Police Department at the time and Norred had come to work for the city from Opelika.

“We must have talked for an hour,” he said. “I knew from the start that he had a good heart and could really talk.”

The comment about being a talker drew a smile from Norred and some laughter from the gathering.

“I knew right away he was a good man,” Vines added. “Seventeen years later, we are sad to see a good man leave. In all the time he was with us, I never heard him make one complaint about anything.”

Vines presented Norred a plaque commending him for his years of outstanding service to the City of LaFayette.

“I just want to thank the city for giving me the opportunity to work here,” Norred said. “I especially want to thank everyone for believing in me. I hope city employees continue to help each other. I believe in this city. LaFayette has been good to me and my family. I am overwhelmed to see so many family members here today.”

Norred said he remembers a number of hurricanes that caused damage in the city where he was working and made for long hours in getting the electricity flowing again.

Hurricane Opal in October 1995 was a bad one, causing massive damage in the Florida Panhandle and in east Alabama. He also remembers being involved in restoring electricity after two storms in 2008, Gustav and Ike.

Electrical workers also get called out when the lines go down during thunderstorms and wintry weather. It’s not a fun job, and it can be dangerous. It takes skilled, patient people to do this kind of work.

Norred has 29 years in the retirement system. He started out in Opelika and moved on to LaFayette 17 years ago. He was honored at a retirement ceremony during the noon hour on Wednesday. He was especially pleased to have his wife, Kath,y present along with some of their four children and eight grandchildren.

Norred credits Auburn University employee Keith Nall on having taught him much in the field of electrical work.

Norred said he enjoyed working in Opelika and LaFayette. He liked being around the people he worked with, and it mattered to him that city officials believed in him and the job that was being done.

When asked how he wanted to spend his retirement years, Norred said, “Playing golf and being with my grandkids.”