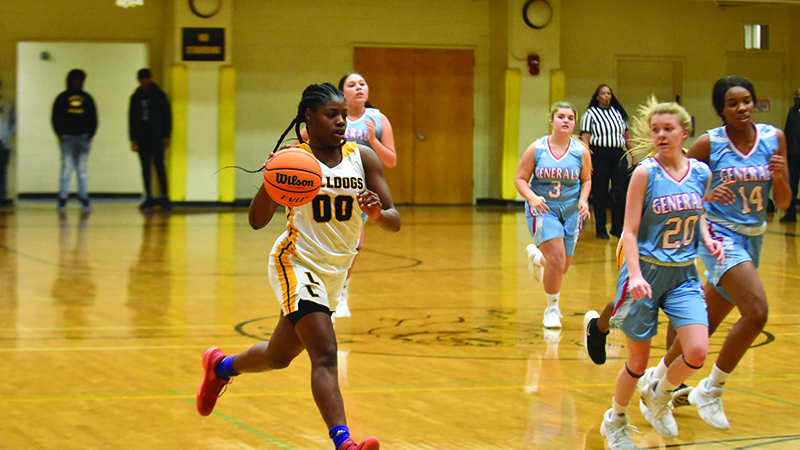 After struggling against a tough Opelika team in its first game of the season, the LaFayette girls basketball team earned its first win of the season 53-36 against Horseshoe Bend. The win was also the Bulldogs first region win of the year, improving their record to 1-0 in their region

“This is what we need to have a reality check, to come in to let us know that we’re not where we need to be and we still have things we need to work on,” head coach Fred Bridges said.

After starting the opening quarter a little slow, the Bulldogs started to find a rhythm later in the quarter as Bridges inserted his normal starting lineup into the game. Once the starters were in the game, LaFayette started forcing turnovers in the backcourt, leading to quick scoring opportunities.

“I had to waste a timeout to reiterate that we needed energy. That’s all we teach and preach is that we need energy and hustle,” Bridges said. “When I added the pieces in, we started to pick up from there.”

In the quarter, LaFayette outscored Horseshoe Bend 15-7. The two players that were inserted later in the game finished with 14 of the 15 points.

In the second quarter, senior forward Feliah Greer reminded the Bulldog faithful how dynamic she was. She forced turnovers, scored 12 of the 14 points in the quarter and was constantly trying to get her teammates involved in the game. She scored most of her points in transition, either going the length of the court or about the General’s free-throw line for a layup.

At the end of the first half, the Bulldogs led by double-digits, as they outscored Horseshoe Bend 14-9 in the quarter.

The third quarter was the only time the Bulldogs didn’t outscore the Generals by the end of the quarter. The Generals’ Caly Carlisle scored all 12 of their points. The Bulldogs scored eight points in the quarter, as four players each made one basket.

In the fourth, LaFayette scored 16 of the final 24 points. Senior Alahbra’j Todd scored six points in the quarter to lead all scorers.

“We just needed to be patient, settle down and focus on what we do as a team. Once we started settling down and being patient, everything started working in our favor,” Bridges said of the second half. “The last 3:30 of the fourth quarter was really big for us. We really stepped up and played the way that we play.”

Greer led all scorers in the game with 26 points. Alahbra’J Todd finished with 13.

“When you have other girls on the team, such as Ebony [Williams], Alhambra’J Todd, you have Talia Lee, you have Akijah Woody, they all bring something different to the game. Everybody has a role,” Bridges said. “One kid may give you 10 rebounds, another may give you 28 points. We all want to bring it together. I’m always preaching it’s a puzzle. It’s not about one person.”

The Bulldogs are home again on Thursday as they host Dadeville. They will travel to Ranburne on Friday as well.