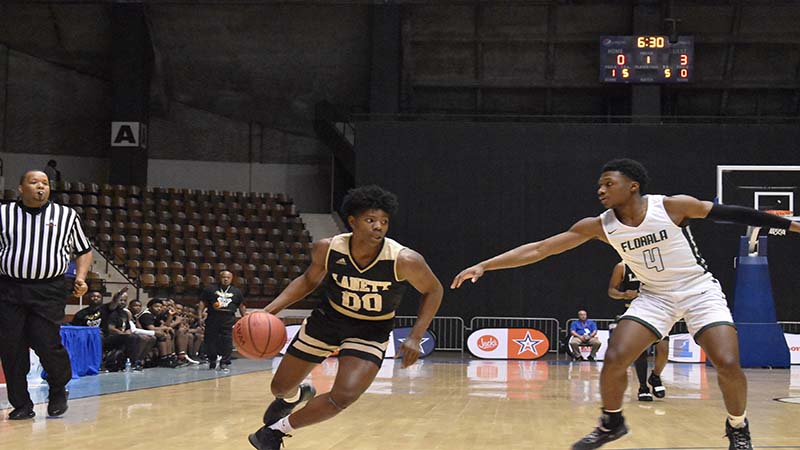 When the Lanett boys basketball team takes the floor on Tuesday, it will look almost completely different from the team that reached the state championship game in late February.

The Panthers graduated four starters, two of which are now playing basketball at Jacksonville University, and long-time head coach Richard Carter decided to retire after a half-century on the sideline.

Even though five long-time members of the Panthers team are gone, Lanett still brings back a wealth of experience.

Abner and Hurston have been playing with the varsity team since they were sophomores, and

Dozier led the county in scoring last year, finishing with 26 points a game.

Abner started as a sophomore as a forward but played off the bench a year ago to give the Panthers more depth at the center and power forward position. Now, Abner will take over as one of the two Panther big men, replacing Cameron and Zameron Boozer.

This year, Abner is also going to have to be one of the team’s vocal leaders on the floor.

“He goes hard when he’s playing, but we’re trying to get him to be more of a vocal leader instead of showing by action,” McCants said. “As soon as they came off the football field, I gave them two days to rest. On the third day, I told them anyone that wants to come workout can come work out. Trey made sure that everyone came to workouts on Monday.”

Dozier is also stepping up as a vocal leader this year according to McCants. He is also making sure players are staying after to work on their craft. Something that Dozier has been working on a lot since midway through last season was his handles, and McCants said that Dozier is still working on dribbling drills an hour after practice is finished.

“He has a drive-in him that you rarely see,” McCants said. “I’ve seen it in the past with [Anquavious] Pollard, Terrion Truitt and Emanuel Littles [all of which have moved on from Lanett to play college sports]. With Dozier, I see that same spark in him.”

Lanett also brought up a lot of players from its junior varsity team a year ago, most of which are now juniors and ready to show what they can do.

Juniors Teo Cheeks and Caden [Pop] Story have some varsity experience as they were pulled up to the varsity team at the end of the regular season last year and mixed into the rotation during the playoffs.

“He’s a sniper at the three,” McCants said. “Every time he shoots it, we know it’s going in.”

Bryant Story and Jay Gibson are two more juniors that McCants expects will play big minutes for the Panthers this year.

“I’ve been excited about those four because I watched them a lot on B-team,” McCants said. “They have a fire in them. They are some dogs. Pop, he still gets teary-eyed when he loses in high school… I like that. That lets me know that he wants to win every game, no matter what level he’s playing at.”

Another member of that junior class that McCants is excited about is D’Quez Madden, who McCants called the best athlete at Lanett.

“He can do it all,” McCants said. “When we’re pressing, we can put him in any spot and let him go. We tell him to do your thing. Offensively, there’s still a lot of things that he needs to learn how to do, but he’s going to help us out a lot.”

This year’s team has the ability to stretch the floor in years past as all of the players are roughly about the same height, compared to recent years as Lanett has had several players that were taller than 6-foot-7.

“I try to make it where everyone can dribble the ball because this year, we’re going to be doing a lot of penetrating and kick,” McCants said. “We have to start getting each other open instead of watching Dozier do all of the work. We’re working on our shooting too. We’ve even been working with Caden Story to shoot from the top of the key. Everyone on our team can shoot the three. We don’t have any flaws when it comes to the perimeter, and I’m excited about that.”

Lanett starts its season on Tuesday on the road at Troup High School.