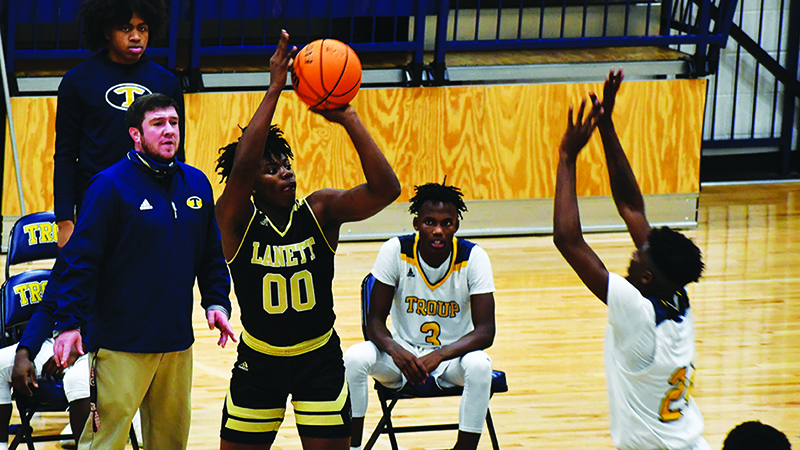 In an overtime thriller, it was the powerhouse Lanett Panthers outlasting the home-standing Troup Tigers 73-67 on Tuesday night.

Lanett rallied from a five-point deficit late in regulation to tie it, and it outscored Troup 8-2 in the four-minute extra period.

Kintavious Dozier hit a game-tying 3-pointer with 20 seconds left in the fourth quarter, and a potential game-winning shot attempt by Troup didn’t fall at the buzzer.

Markavious Atkinson hit a 3-pointer early in overtime to give Lanett a lead it wouldn’t relinquish.

Senior KJ Tucker had a big game for Troup with 27 points while making seven 3-pointers, and Ricco Person added 14 points.

With Tucker leading the way with 14 first-quarter points while making four 3-pointers, Troup surged to a 20-13 lead.

Lanett took charge in the second quarter, outscoring Troup 22-9 to build a 35-29 lead at the half.

Troup was down by seven points in the third period when Tucker hit another 3-pointer, and that was the start of an 8-1 run that deadlocked the score at 41-41.

Lanett quickly regained the lead, and it took a 52-47 lead heading into the final quarter.

The Tigers came out firing at the start of the fourth quarter, with a Tre Scott steal and layup capping an 8-0 run to give the home team a 55-52 lead.

Lanett scored the next four points to reclaim the lead, but Tucker drained his sixth 3-pointer of the game to give Troup a 58-56 lead with 4:40 to play.

Lanett responded with a 5-0 run to tie it, and it carried that momentum into overtime to secure the hard-fought road win.