Lanett boys struggle down stretch against Troup, fall to 2-1 on season 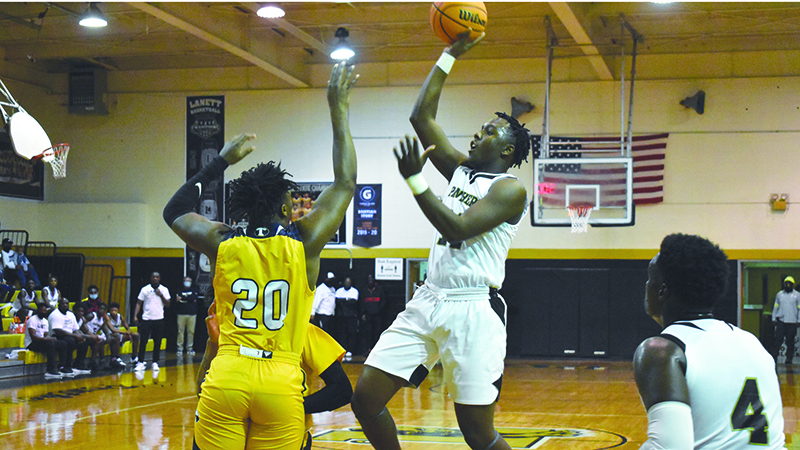 With just 3.1 seconds left in the game, Lanett trailed by three points and sent Tre Scott to the free-throw line to shoot a pair of shots. The first shot hit the front of the rim, while the second one clanged off the side of the goal.

Lanett corralled the rebound, but Troup trapped the Panther under his own goal, who was forced to heave a desperate shot as time expired.

The difference in Tuesday’s loss and Lanett’s earlier win against the Tigers was the team’s energy according to head coach Trentavious McCants.

McCants believes once his team gets more fluid in his system and playing with more urgency, they will be able to close out these types of games more routinely.

Lanett’s biggest weakness on Tuesday was its free-throw shooting. The Panthers finished just 10 of 22 at the line.

Lanett and Troup both stumbled to start the game, as neither team had scored a little more than two minutes into the game, both missing free-throw attempts. Trey Abner scored the game’s first points with 5:47 left in the quarter. In the next two minutes, Lanett built a slim five-point lead.

Both offenses heated up in the second quarter, as the two teams started to trade points. Troup tied the game with 6:08 left in the half. For the next six minutes, the lead changed hands four times, as Troup took a four-point lead that Lanett erased with seconds left in the half. At halftime, Lanett led 23-21.

“We started to play four guards and one big,” McCants said of his team’s offensive turnaround in the second quarter. “We weren’t really doing our transition offense, which has been our bread and butter the last six years. We were jogging down court… We need to make our layups and execute better on offense.”

In the second quarter, Abner was forced to retreat to the bench for about half the quarter and the entire third quarter, as he was dealing with foul trouble, which messed with the Panthers’ offensive and defensive rotations.

“Trey helps us with our pressure,” McCants said.  “He can play the big or the guard position. He’s long. With him getting in foul trouble, we had to play some guys that didn’t have as much experience on the court. That hurt us.”

Troup took the lead early in the third quarter and controlled the game from that point on, building a nine-point lead that it sustained for most of the quarter. Lanett was held to 10 points in the quarter.

Troup only made one shot from the floor in the fourth quarter, as it was trying to use up as much clock as it could for most of the quarter. In the end, it made seven of its 12 attempts, which gave Lanett a chance at the end of the game.

Kentavious Dozier finished with a team-high 14 points in the loss for Lanett while Ricardo Person finished with 11 points to lead the Tigers.