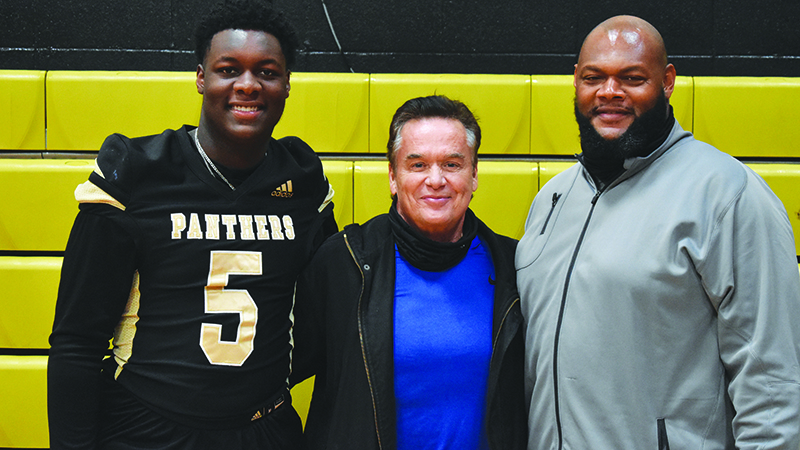 Since 1979, Tom Lemming has been known as one of the country’s top high school football recruiting analysts. Lemming releases the Lemming Report, which has information about the top players from around the country, many of which have become Heisman Trophy winners, NFL stars and hall-of-fame players.

On Tuesday, he was in Lanett to visit with junior Caden Story, naming him a Lemming All-American.

“Just his size,” Lemming said of what stood out about Story. “I’ve seen a little Hudl film on him too. He’s got an explosive first step. He’s a terrific all-around athlete. I see everybody in the country, and he’s got a great background, he’s got the bloodlines and he’s got the production. He looks the part of what he should as a defensive end… He’s got everything going for him.”

Lemming creates his list by watching film on the best 2,000 players in the country. After deciding which players have the film to make the cut, Lemming then drives from his home in Chicago to meet the players to see if their size matches their given measurements.

Because of travel restrictions due of COVID-19, Lemming has limited his trips for the 2021 class to just the presumed All-Americans.

“You have to have the size that fits the position,” Lemming said. “When you talk to the guys, you have to know if they have the desire because once they go up against guys around their own size and speed and their raw athletic ability, it comes down to desire and how much you really want it.”

Before the start of his junior year, Story was named a four-star defensive end by all major recruiting websites and was named an ESPN 300 player. He is currently the No. 9 player in the state of Alabama and the No. 10 strong-side defensive end in the country according to the 247 Composite rankings.

“It means a lot, especially as a parent and their coach, for them to be able to receive such accolades from a guy like Tom Lemming, who studies and goes all around the country to evaluate players,” Lanett head coach Clifford Story said. “It speaks volume for their work ethic and their athletic ability. Sometimes as a dad, you don’t see some of the things that other people see because you have them under the microscope. For them to be recognized as an All-American, it’s a great deal. It’s a big deal, and it shows that it doesn’t matter where you’re at. If you’re getting it done, you’ll be seen.”

Caden has offers from Auburn, Indiana, Arkansas and Tennessee. In his junior year, which was his second full year playing defensive end, Story finished with 17 sacks and more than 20 tackles for a loss.

“Of course, his recognition will probably go up more, just by him being named a Tom Lemming All-American,” Clifford said. “Caden will have to raise his game as well. With accolades, it comes with a lot of pressure in a lot of other areas as well. I feel like Caden will continue to develop and get even better next year. Caden is still just in his second year playing defense, so he’s still trying to figure out some things, but I think he’ll do fine and the recognition will help raise his game as well.”