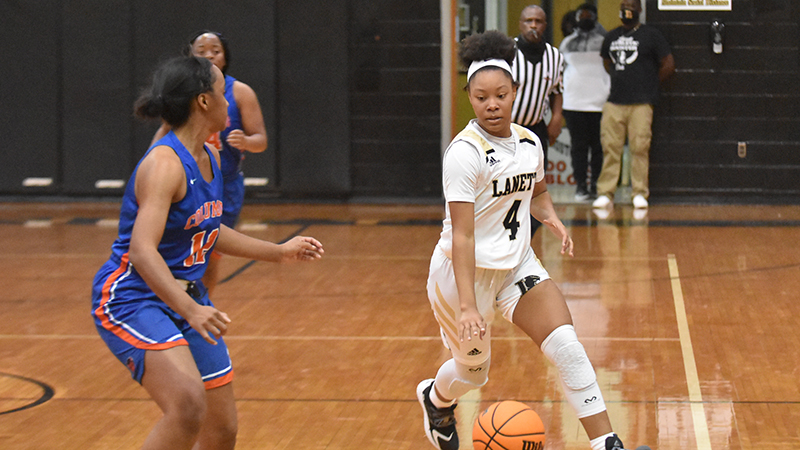 After struggling against Troup in its first game, the Lanett girls basketball team wanted to play with a lot of energy on Saturday against Columbus. It did just that, scoring nearly half of its points in the first quarter, setting up a 46-21 win.

“We came out flat last week against Troup, with no energy,” head coach Charlie Williams said. “It set the tone for the game. We came out with a lot of energy tonight.”

With the win, the Panthers are 1-1 on the season.

“It was a good win,” Williams said. “You try not to make one win more important than the next one, but this was a big win. We needed to get in the W column.”

Halfway through the first quarter, Lanett had an eight-point lead, as the Panthers were able to get to the free-throw line and take advantage of most of their attempts. After making most of their attempts, the Panthers had time to set up in their full-court defense, which started to cause problems for the Blue Devils, forcing turnovers that quickly turned into Panther points.

At the end of the opening quarter, Lanett led 20-1.

“I just wanted them to play with energy and execute. It really wasn’t about the lead,” Williams said. “It was just about them playing hard. Against Troup, we just didn’t play hard. I can take losing, but I can’t take losing if you don’t play hard.”

In the second quarter, Williams started to rotate in different players, looking for possible combinations that could pay off down the road. Even with the number of different combinations of players, the Panthers continued to rely on their defense to take Columbus out of the game.

Lanett allowed just one made shot from the floor in the entire first half, a layup with 5:39 left in the second quarter. Columbus’s other three points were scored from the foul line.

Offensively in the first half, Lanett took advantage of Laila Lancaster’s size, as the freshman stands taller than six feet tall and towered above every player on the court. She finished with nine of Lanett’s 30 points in the half.

“I played a lot of combinations in the second half,” Williams said. “We’re trying to find a rhythm. A lot of the girls, it was their first varsity game, and I was just trying to get their feet wet and get them to relax. They were thinking too much.”

Lanett has a chance to avenge its loss to Troup on Tuesday when the Tigers visit Lanett. The first game is scheduled for 4:30 p.m.