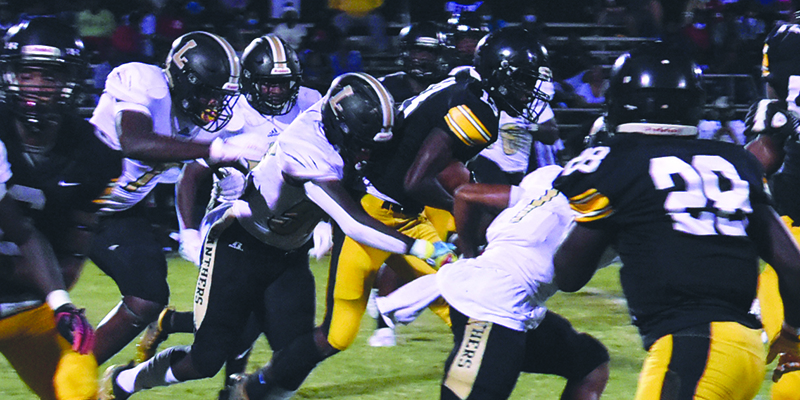 The first player of the talented 2021 Lanett senior class has chosen where he will continue his football career. Linebacker Kelvin “Geico” Zachery announced on Twitter that he will play at Faulkner University.

He chose Faulkner for more reasons than just the football aspect.

“I just felt like me making this commitment to Faulkner was deeper than football because Quae [Houston] was going to Faulkner,” Zachery said. “I just want to fulfill his dreams and play with Faulkner and show them what I can do. I feel like I’m going to make a whole lot of people happy by doing it. I know that I’m going to make his mamma happy because I know she knew her son wanted to go play, so I’m going to do it for her.”

Houston was a member of the 2019 state championship team that died suddenly in August. He had committed to play at Faulkner in June. He was Zachery’s cousin.

Zachery originally always dreamed of playing basketball, not football, but once he started to play football, he fell in love with it.

“Growing up, I never even thought about the NFL. I used to love basketball so much,” Zachery said. “Once I started getting into the hang of it and hanging around people that played football and took it seriously, then I started to see what it was like.”

Zachery really started to develop after his sophomore year of high school. He started to learn the game more seriously and develop his skills.

“Geico really developed along the way. He learned how to be a linebacker without being a true blitzer,” Lanett head coach Clifford Story said. “In the beginning, he struggled with some areas because that’s all he wanted to do was blitz. He didn’t understand how to read linemen, get to his fits and get to where his pads drop. This year, you saw the development early on and you saw the consistency all year.”

This offseason, Zachery worked hard in the weight room to prepare himself to make more of an  impact his senior year,

“I was really pleased with him because he developed his body a little more than he had done in the past,” Story said. “He really committed to the weight room. I told him ‘to be a linebacker, you have to look like a linebacker.’”

The hard work paid off this season. Zachery led the team in total tackles, finishing with 102 total tackles (74 solo and 28 assists), 28 tackles for a loss, six sacks, nine quarterback pressures and an interception.

The hard work that allowed Zachery to shine this season is part of his game that he thinks will allow him to continue to take the next step during his college career.

“There are a lot of linebackers that are bigger than me, but I feel like I’m a lot faster than a lot of other linebackers,” Zachery said. “At Lanett, we do a lot of running, so I know that I’ll be very well-conditioned. I think my biggest strength will be my speed and work ethic.”

Zachery finished his high school career at Leroy in the third round of the playoffs. He leaves Lanett as a two-time state champion with plenty of leadership experience on playoff teams.

The Lanett defense dominated the Panthers’ season, allowing 101 points all season. There were only a couple of times that opponents were able to march downfield and score. Zachery was in the middle of that success playing middle linebacker.

“Sometimes, egos get in the way, and in order to have success, everybody can’t lead,” Story said. “You have to have those two or three guys that can [lead] on and off the field … It means a lot to have guys like that the younger guys respect and the guys that are in your class because they know your ins and outs, but if you do it the right way, they’ll follow. We had guys this year, including him and everyone followed.”

Zachery will represent Lanett one more time on the football field on Jan. 16-18 in Gulf Shores when he will play in the DREAM All-American Bowl.