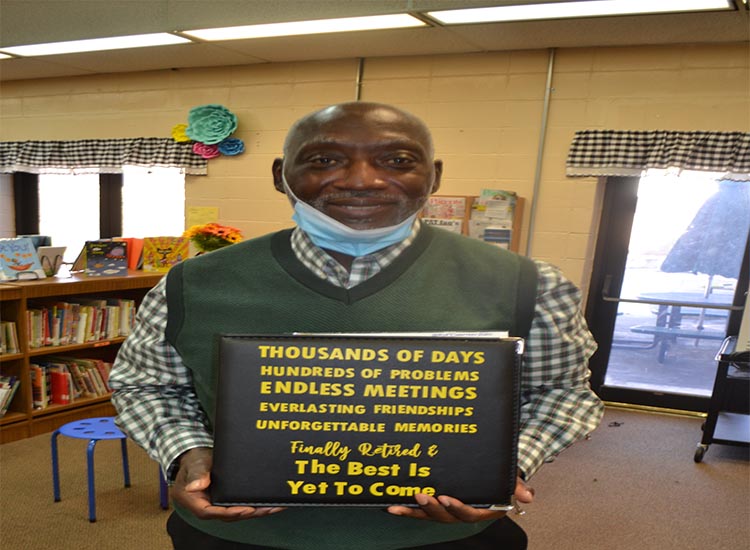 LANETT — Friday was the final day for Jamie Heard as principal at W.O. Lance Elementary School. He’d been at Lanett for 26 years, first at Central Elementary, then a couple of years at Greene-South Elementary and then back to Central when Greene-South closed in 1999. In recent years, the school underwent a name change to W.O. Lance with Heard remaining as the long-time principal.

The greatest satisfaction an educator can have is to see their former students go on to success in life. Of the thousands of students who came through Lanett’s elementary school over the past quarter-century, many have gone on to earn college degrees and have professional careers. Three members of the current W.O. Lance staff, Reagan Gilbert, Alexis Ross and Brandi Burrows, are former Central students.

Heard’s parents, the late Jack and Emma Heard, instilled in him at a very early age the importance of doing well in school and getting a good education. He was one of the first Black students to enroll at Shawmut Elementary School. He credits his first-grade teacher, the late Julia Cumberlander, for sizing him up as a future educator. She pointed the way, and at a young age he followed.

Heard cites Phyllis Stiggers as another teacher who had a great influence on him pursuing a career in education.

Heard graduated from Valley High in the 1970s, attended Southern Union State Community College for two years and later earned a B.S. at Auburn University. He went on to earn a master’s degree and certification in administration from Troy University. He returned to Shawmut Elementary (now Bob Harding-Shawmut) in 1980 to teach. He’d attended school there as a child, worked part-time in the lunchroom there while going to college and was a classroom teacher.

Heard taught fifth grade at Shawmut for a number of years before being transferred to J.P. Powell Middle School in LaFayette in 1993. He taught sixth and seventh-grade students for a year before being hired by the Lanett City System the next year to be a principal. He was the first Black principal at Central.

Heard is proud of what his three children have accomplished in life. Daughters Amber and Candace are in the medical field. Amber is an R.N. with WellStar-West Georgia in LaGrange, and Candace is in a medical office in Phenix City. His son, Antoinn, lives in Calera and is with Regions Bank in Birmingham. His brothers have done well, too. Homer Heard has a plumbing business in Lanett, Fob is retired from Uniroyal and Bob Heard is a retired educator living in Montgomery. Bob played basketball for Grambling University and Columbus State and played briefly in the NBA.

“It was so good to see them again and talk to them,” he said. “We have always been one big happy family at this school.”

Early on in his career in Lanett, Central was the largest elementary school in Chambers County with more than 700 students in K-6. Enrollment then went through a steady decline for a number of years, at one point being at just over 400 students. That’s turned around in the past six years with enrollment on the rise once again. It’s now back above 600 with Latino students being a big factor in that. More than 90 students of Hispanic heritage are at W.O. Lance this year.

Heard is proud of the fact that he hired almost every member of the current W.O. Lance staff. The school presently employs 55 people.

He may be retired from education, but Heard plans on being active in the community. He’s a long-time member of the Lanett City Council and would like to continue serving in that capacity. He also wants to remain active with his church, Mount Hermon Baptist, where Dr. Lamar Johnson is the pastor. In addition, Heard has worked part-time at Davis Memorial Mortuary in Valley. Once we get past the Covid pandemic, he would like to serve in some way at EAMC-Lanier Hospital and Nursing Home.

People coming by to visit with Heard in the media center were treated to snacks from Chick-fil-A. There was also a big “We’ll Miss You!” cake with a Panther head on it. Tawana Henson had a most unusual framed painting as a special gift. Shown was a large spreading oak with the colorful fingerprints of staff members appearing on the tree like acorns. Another gift was entitled “Thousands of Days, Hundreds of Problems, Endless Meetings, Everlasting Friendships, Unforgettable Memories, Totally Retired & the Best is Yet to Come.” It was a scrapbook containing letters from friends wishing him a long and healthy retirement along with many photos and news clippings of events at the school.