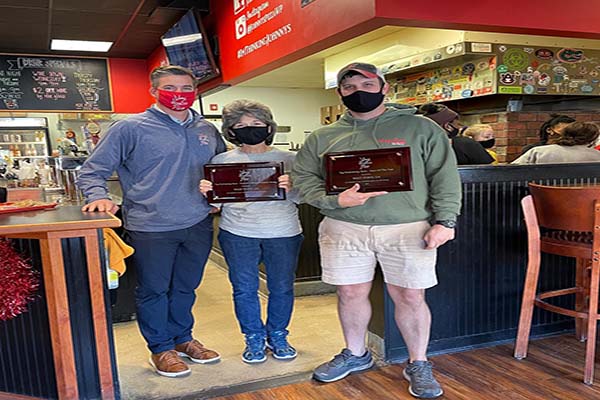 On Wednesday, Johnny’s Pizza owner Ben Hamilton received a text from the franchise’s owner, Luke Jackson, to see if Hamilton would be in the store on Thursday so he could drop off a few things.

Instead, he surprised Hamilton with the plaque for the 2019 Store of the Year.

For us to come out and win this award, it’s huge, not only for us, but our community and the staff.”

Franchise awards are usually given out in March, but due to COVID-19 the annual franchise meeting canceled, and the makeup date for the meeting was also canceled in September, which is why the store is just now receiving the award.

Hamilton credits his staff for the store’s chance to win the award, as the small staff is considered family.

Johnny’s in West Point celebrated its 10 year anniversary earlier this year. The franchise was started in 2010 by Hamilton’s parents. At the time, West Point was a smaller town and restaurants struggled to stay in business on the square. Now, Johnny’s is a staple in downtown West Point.

“It really is very rewarding, and I’m honored to receive it,” Hamilton said. “When we opened in 2010, this was something that we dreamed of, but definitely thought was unattainable because of where we were. We’re in a small town, we’re not able to do the sales that some stores do, and we’re only open six days a week. For us to get that, it means a lot, it truly does. It shows what a small town can do.” Johnny’s in West Point also won the award for the highest customer feedback rating, which the store has won four years in a row.

This award takes reviews from all of the possible review websites, and the West Point-based Johnny’s was the highest-rated franchise. “That speaks volumes about our staff,” Hamilton said. “For us not only to win that award again but to win the Store of the Year award with that, it means the world to me, especially at the end of this year, as tumultuous it has been. To have that at the end of the year is awesome.”