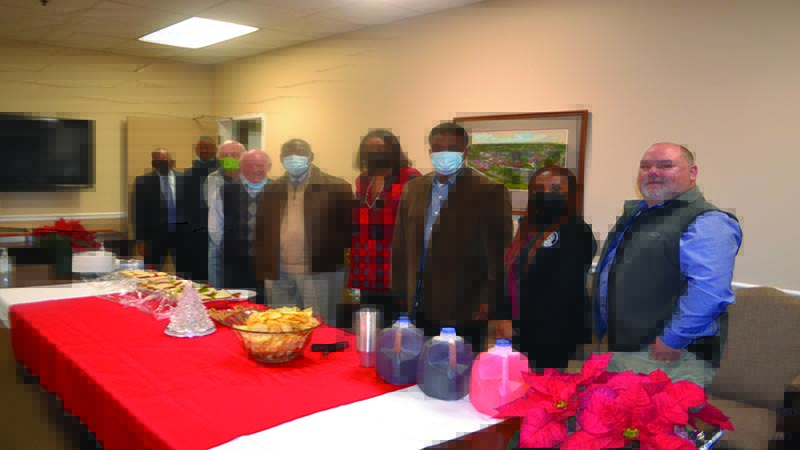 LANETT — The Lanett City Council held a work session on Wednesday evening to discuss some issues that will be acted on at Monday’s regular session. Mayor Kyle McCoy explained some items that will be on Monday’s meeting agenda.

They include a contract extension for Avenue Insight (formerly known as RDS), which collects the city’s sales taxes and business license fees; a contract renewal for the Municipal Gas Authority of Georgia (MGAG), which supplies natural gas to the city; the purchase of new light poles for the North Lanier Avenue project, and a 30-year lease with the Chambers County Development Authority (CCDA) permitting it to have office space at the new Lanett airport terminal.

There was also some discussion of naming the airport for the late Bobby Williams, who had served as a city manager and more recently as the CCDA board president. McCoy said that Williams had been the key person in getting the airport project to where it is.

“Without his leadership and foresight, we’d probably still be sitting here with a 3,100-foot runway and considered by the FAA as an example of how not to run an airport,” he said.

“I definitely believe that,” CCDA Executive Director Valerie Gray said. “He was someone who could turn a dream into a reality. I can’t wait for the runway to be completed and for the airport to open this time next year. I assure you we will be working even harder because of where we are.”

The CCDA is now located inside the 5,400-square-foot airport terminal. It’s one of few development authorities anywhere located at an airport. This gives the staff the opportunity to talk to business and industry representatives within easy walking distance of their business-class jet.

An estimated 14 wooden poles along North Lanier will be replaced by 14 metal poles that will be an estimated 40 feet in height. The most expensive pole replacement will be at the corner of North Lanier and Cherry Drive. A crane will have to be rented to do the work. This pole has major lines for Charter Spectrum, WOW! and local industry. It will be swapped out for a new pole before the concrete is poured for the new sidewalk that’s going in.

The mayor commended the city’s electrical department on having done good work in removing lines that had crisscrossed North Lanier for years. Langley Motor Company, for example, is now getting its electricity from behind the business rather than from in front.

“There’s a tremendous difference in the appearance of the street,” McCoy said.

The lease agreement between the city and CCDA on office space is designed to benefit both parties.

“It’s a mutual partnership,” Gray said. “The property value of the terminal will increase significantly when the airport opens.”

McCoy said it was a good thing the building has been equipped with lots of technology.

“We overbuilt on IT, so we could grow as technology improves,” he said.

Rick Aliff and Houston Black, the president/CEO and COO of Clearwater Solutions, were present at the work session to discuss a new proposed contract with the city. Clearwater has been running the city’s wastewater plant and is now offering to run the city’s water system as well. In three years of running the wastewater treatment plant, Clearwater has saved the city several hundred thousand dollars over what it had been paying. Aliff and Black said that similar savings could go into their operation of the city water system.

That decision would involve some city employees moving over to employment with Clearwater. Aliff said they would be paid at the same, if not a better rate. Aliff said he’d moved to Lanett 20 years ago from West Virginia to run the Lanett wastewater plant, and he has been with Clearwater for 13 years.

“To be successful in anything, you have to surround yourself with good people,” he said.

He cited Black, the company’s chief operating officer, as an example of that.

“He came to us from Hanceville, Alabama and started off cutting grass on a part-time basis,” Aliff said.

“I have had great opportunity with this company,” Black said. “I want others coming along and having great opportunities, too. We want you to know that our employees will be our number one priority in Lanett. We had 19 employees certified last year. Having a certificate in wastewater management is like having a college degree.”

“Our biggest concern with this is whether or not our employees want to do it,” McCoy said.

Aliff said he had talked to them and felt that they were okay with transferring over.

According to the proposed amended contract, the city would still own the plant and the distribution system. Clearwater would supply the labor and the contracting services.

Following the work session, the council had a reception to honor Council Member Jamie Heard, who is retiring as the principal of W.O. Lance Elementary School. He’s been in Lanett for 26 years and in public education for 42 years.