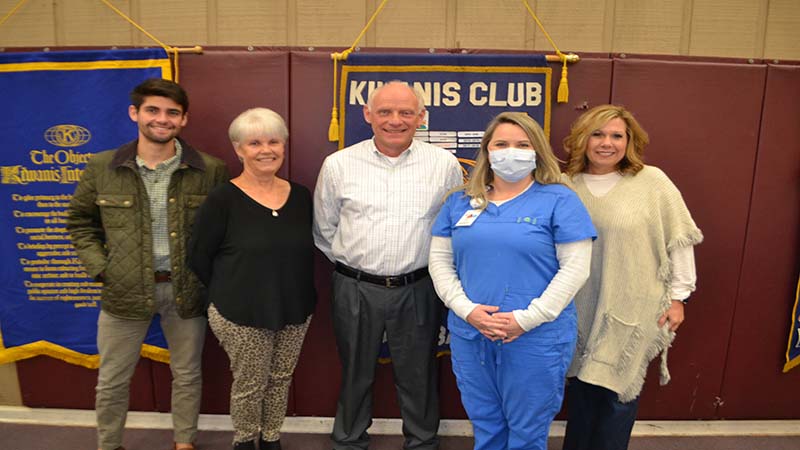 VALLEY — Lanett Mayor Kyle McCoy was the guest speaker at Wednesday’s noon hour meeting of the Kiwanis Club of Valley. He talked about the city’s planned tree-lighting event at 6 p.m. EST on Monday and three ongoing projects, the downtown streetscape, the airport expansion and the redevelopment of the Lanett Mill site.

In recent years, the tree lighting attracted big crowds. A stage was set up on the playground across from Veterans Park, and a sizable crowd was treated to Christmas music played by the Lanett High Band and holiday songs performed by local singers. An award was given to a Citizen of the Year for their outstanding contributions to the community.

“It’s not going to be as festive as it has been in recent years,” McCoy said. “We are going a different route this year. We will still have a tree lighting, but we are asking people to park along First Street and Eighth Avenue and to watch from their cars. We will have a PA system where everyone can plainly hear what’s going on.”

There will be a theme of honoring those who have been lost to COVID-19. Those who live in Chambers, Troup or Harris counties who have lost a loved one this year due to the pandemic may bring something to remember them by and place it under the tree.

“Something like a card, wreath or a Christmas ornament with their name on it will remain there until we take the tree down at the end of the month,” McCoy said. “Our east Alabama-west Georgia region has been hit hard by this, and we’d like our Christmas tree to remember loved ones who lost their lives in 2020. Almost everyone in the Chattahoochee Valley knows someone who has died of Covid.”

One thing Lanett has a lot of right now are orange cones. Plenty of them are on both North Lanier Avenue and First Street, marking construction areas of the streetscape. The wide sidewalks, drainage areas, planters for flowers, shrubs and small trees, benches and decorative lighting is going in on the east side of North Lanier from the bridge over Tanyard Creek to Cherry Drive. Similar work is taking place on First Street.

Several weeks ago, Alabama Gov. Kay Ivey informed the city that a $530,000 grant had been approved to continue the streetscape look on First Street from Highway 29 to Eighth Avenue. That work should start next April or May and be completed by the end of 2021.

Also to be finished by the end of next year will be the Lanett Airport expansion. A $1 million terminal is ready for occupancy. The Chambers County Development Authority (CCDA) will be relocating there this week. Director Valerie Gray already has some Christmas decorations up. The CCDA offices will be on the left side as one enters the front door into a massive lobby. On the right will be the airport-related offices such as a flight planning room and pilot’s lounge.

The Lanett Airport runway was around 3,100 feet long when last in operation. That was lengthened to 4,400 feet in phase one and is now going out to 5,400 feet in the second phase. Altogether, Lanett has received an estimated $15 million to get all this work done. When all the work is done in late 2021, the Lanett airport could be a prime landing site for Kia and its suppliers, John Soules Foods, Norbord, Knauf, WestRock and other major companies with local ties. It could also serve as a backup landing site for Auburn University, only 30 miles away.

“The beauty of it is that we’ve been able to do what we have without bond financing or having a tax increase,” McCoy said. “Because it’s a transportation grant,we were able to get 100 percent financing.”

One future project remains for the airport: building a new access road. It will cost an estimated $1.8 million to have a new road going to the airport branching off from the road to Norbord.

There’s already great interest in people having hangar space at the airport.

“There’s a lot of interest in what we are doing,” McCoy said. “If I was only interested in selling space or leasing to anyone who asked, I could have sold 100 of them by now. We want to sell or lease them to people who will be bringing jobs. We need to position ourselves for future economic growth.”

A new look for downtown has been a long time coming for Lanett.

“We have been talking about this for 30 years,” McCoy said. “It’s wonderful to see it coming to fruition. If you go to places that are growing, places like Auburn and Opelika, LaGrange and Newnan for example, you see towns where people have done good work in keeping up their downtown areas. They haven’t allowed them to decline and look neglected. They understand that if they don’t take care of themselves, no one else will.”

A transformation has taken place on the Lanett Mill site since the city purchased it a year-and-a-half ago. Piles of broken brick and concrete, twisted metal and broken glass were in near proximity to heavily-traveled Highway 29 in the spring of 2019. Most of that is now gone or pushed to the far side of the property, and a Tractor Supply store has been built on site. The store will soon celebrate its one-year anniversary of being in Lanett.

The city has a master plan to develop the rest of the site.

“We aren’t looking to have a bunch of cut outs,” he said. “We want to build something that will be a center of activity.’

McCoy said that people throughout the local area need to realize that Lanett, West Point and Valley are one community and when something good happens to one of the cities, it’s good news for the other two towns plus the surrounding area. He mentioned the news that West Point is getting a major expansion on the Kia site, something that will bring more than 600 new jobs, as good news for the entire area. He also said John Soules Foods is good for the entire area.

“We have to think of ourselves as one community, and that what’s good for one is good for all,” McCoy said.

The opposite of that is also true. One study recently estimated that when WestPoint Stevens left the U.S. for foreign production, the Valley area alone lost one percent of the entire textile industry in the U.S.

“On the surface that doesn’t sound like a lot,” McCoy said, “but when you stop to think that it’s one percent of the entire country, that is a lot.”

“Thank you for giving me the opportunity to talk about the City of Lanett and to promote Chambers County along with the east Alabama-west Georgia region,” McCoy said. “We are inviting everyone to come to our tree lighting next Monday, just remember to place memorials under the tree before the lighting ceremony and to watch from your car.”

“So far, we are not having as much of the flu as we normally have,” he said. “Public health experts are attributing that to wearing masks, social distancing and frequent hand washing. Let’s keep doing that, and let’s keep each other safe.”