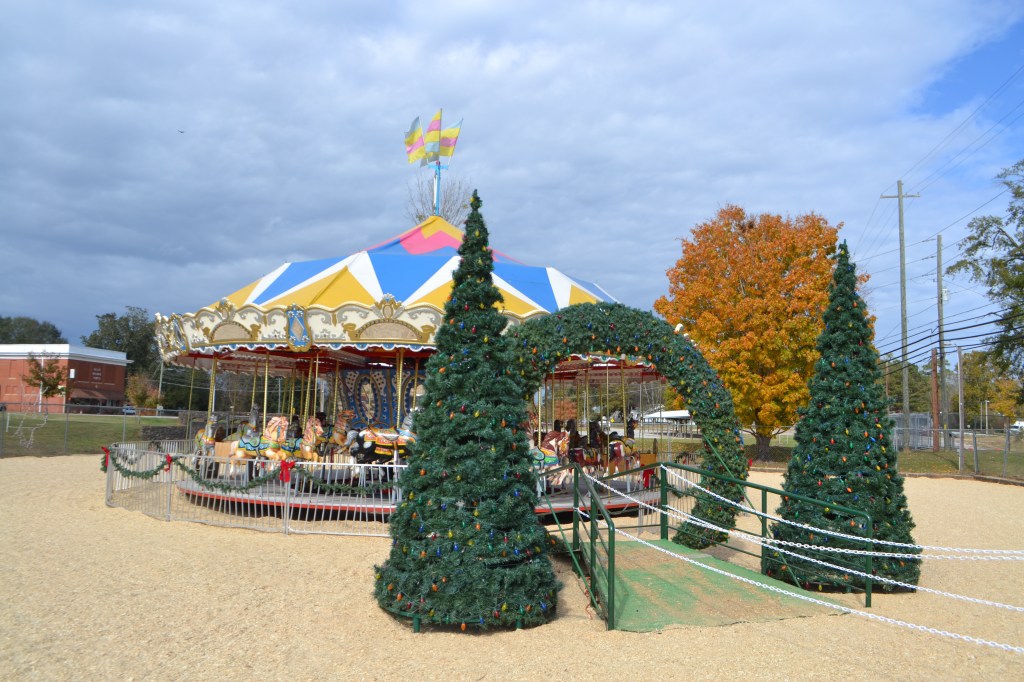 VALLEY — Sunday afternoon’s rain washed out the planned opening of the Christmas Merry Go Round on the Langdale tennis courts. The opening was then shifted to 5 p.m. on Monday.

Ballard Party Rentals LLC of Opelika will have their miniature train and mechanical bull at the merry go round on Saturdays and Sundays. Traditional Christmas characters such as the Grinch and a snowman will be there on the weekends as well.

Attendees are being asked to wear masks and to practice social distancing while standing in line. Family groups should spread out at least six feet from the next group. As a safety precaution, the merry go round will be sanitized by a misting machine between rides. This can be done with one slow revolution of the merry go round.

“We don’t want word of this to keep people away,” said Valley Parks and Recreation Director Laurie Blount. “It will only take between a minute-and-a-half to two minutes to do this, and it will make the ride safer. We don’t believe it will be that much of an inconvenience. We are doing all we can to make this as safe as it can be. The Christmas Merry Go Round is a cherished tradition. It’s been going on for 64 years now. We didn’t want this year to be the year we stopped it.”

Merry Go Round owner Richard Tinsley, of Tinsley’s Amusements, High Hill, Missouri, was pleased to bring his prized merry go round to Valley this year.

He normally takes it to only two events, the Minnesota State Fair and to Valley. In Minnesota, it’s set up indoors at the famed Mall of America. Tinsley normally takes a host of his rides to state fairs all over the midwest. Because of COVID-19, most of these events were canceled this year. His amusement business suffered as a consequence.

“He was surprised and pleased when we told him we wanted his merry go round to come back here,” Blount said.

The present site in Langdale is the fourth different location for the Christmas Merry Go Round. From 1956 through 1967 it was at a little league ballpark in Fairfax. In 1968 it was on Shawmut Circle before going back to Fairfax, where it was held every Christmas season up until 2009 when the site fell victim to the WestPoint Stevens bankruptcy. The location was then shifted to Valley Sportsplex for a couple of years before being relocated to the present site in 2011.